I am Muriel Gardiner Bowtell. I was introduced to the "Folks" north of the river - first at Martin school district in 1938 and the next year at Frog Lake school district. My home was at Hazeldine, 5 miles from Dewberry, where my parents, Mr. and Mrs. Lewis Gardiner first farmed and later moved to "town". They and my uncle, Graham Gardiner, had a general store, garage, and car and machinery agency.

At Martin school there were 16 pupils, grades 1 - 9; however, two or three grades were missing. I lived in a one room teacherage on the school grounds, There were four girls in grade nine, Marnie Resler, Evelyn Womacks, Cathy Boyd and Irene Rushfeldt. Agnes Rinde was in grade eight. These girls were a lot of company for me especially as I lived alone. At that time grade nines had to write departmental examinations and their marks were in the form of letter grades. Two of "my girls" each got "A" and the other two each got "B". Needless to say, I was very proud of them. 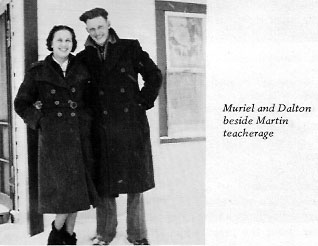 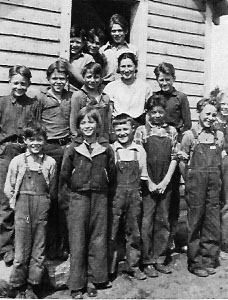 The winter was pretty chilly in that little teacherage; ice would form at the back of my bed and in the water pail at nights.

One day in the summer I heard about the Sundance and others to be performed on the Frog Lake Indian reservation. So, as I had an old car I piled all the "Kids" in and on it and away we went to see this display. I had never seen anything like that before so it was quite a sight for me, and I think my pupils enjoyed it too. I can't remember if all sixteen children were at school that day but I certainly did have a load.

The next fall I began teaching at Frog Lake school. A most wonderful, community minded man, William (Billy) Jamison was on the school board. He was always ready and willing to help any and everyone.

That year I boarded at the Fred Bowtell home. Harvey Bowtell, I believe, was in grade six - he later became my brother-in-law. I sometimes walked the three miles to this school and also walked home. In the winter Harvey and I travelled in a toboggan. Many times we upset due to the uneven nature of the road. Some ruts were too narrow to take the toboggan and it would tip over and we would land in the snow. This was quite different to the roads and the busses that the students use now.

The Christmas concert was a highlight of the winter. There were many hours of practising for the plays, the songs, the drills and the recitations but everyone was enthusiastic about the preparations. When the big evening came

the Frog Lake hall was packed with interested parents, relatives and friends.

The young peoples club that met at the hall for dances was really a wonderful, fun organization. We all had a good time and in those days scarcely any of the members felt they needed liquor to have a fantastic evening. All in all, it was a most enjoyable two years.

Dalt Bowtell and I were married in July 1940 and in 1943 we moved to British Columbia. We now live in Surrey, a few miles out of Vancouver. We have three children, Dalerie, Douglas and Kathryn, and we have two grandchildren, Dallas and Gregory.