Dalton Bristow was born in Grey County, Ontario, January 23, 1894. In 1900 he moved with his father to Okotoks, Alberta and from there in 1910 to Frog Lake. He homesteaded the N.E. Quarter of 24-56-4-4. He broke quite a bit of this land and took out sawlogs for himself; date of permit was )February 15, 1911. He had them sawed at his fathers sawmill and built some buildings on his land. He did a lot of riding, exploring this country, when he first came up here and kept track of the range horses our family had. There weren't very many homesteaders at that time. Dalton was a good shot with the rifle. He and brother Dave quite often got moose, elk, and deer. They did a lot of fishing and hunting by Laurier Lake. Moose and elk could quite often be seen right from the buildings in those days. 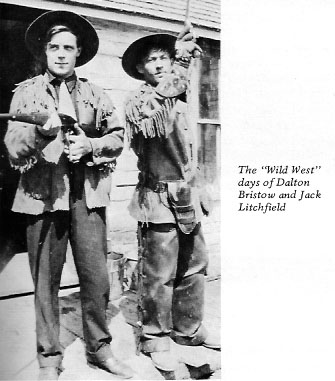 In the spring of 1916 Dalton joined the army, the C Company of 151st Battalion, at Vermilion. The same day three more fellows from here joined; they were Marsh Upchurch, Bert Tandy and Jim Gardner. From Vermilion they went to Sarcee Camp by Calgary. Then in September the same year they were sent to England to Thorncliff, Kent.

The need for men on active service was very urgent and the C Company was soon divided. Dalton was sent to France as reinforcement of the machine gun section of the 8th Battalion. The mud condition in the trenches was very bad the winter he spent in France. He was wounded at Vimi Ridge Easter Monday, April 9th, 1917 and sent to hospital in East Landling, Kent. He stayed in England for almost a year and was again sent to France. He was made a lance corporal of the machine gun section. August 9th, 1918 he made the supreme sacrifice; he was killed in action and was buried at Warvillers east of Amiens, France. 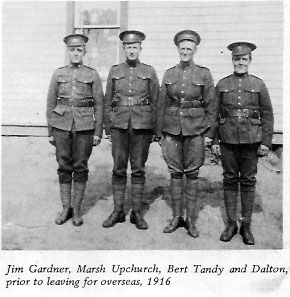