I was born in Rollo Bay East, P.E.I. on the 15th of July, 1898. In 1916 I could not get the $18.00 per month they were paying men for labor, such as haying, so I decided to do as they were saying then - "Go west, young man, go west." I caught the train, a harvest excursion, at Charlottetown with some friends who were as green as I and a few hardened "excursionists." I left the "Garden of Eden," never dreaming it would be 50 years (1966) before I would see it again. I was headed for Consort, where some of our Island neighbors were settled. Therefore, I arrived at Joe Deagles', where I worked for two years.

I had never handled a four-horse team before, but was willing, so Joe started me out double-discing. For a reason unknown to me, I couldn't stay awake. I'd get a bump when the disc hit a rock and waken, only to have the same thing happen again. Finally, the horses got dry, and when I wakened that time, we were in the middle of a slough. Afraid we would all disappear in the mud, I hastily got them out of there, drove up to the house, and told Mrs. Deagle I couldn't stay awake. She took one look at me and said, "You get upstairs to bed, you've got the measles! I'll look after the horses." So ended my first day on the prairie.

In 1918, in the fall, I moved to J. O'Donnell's, one half mile out of Consort. That was where I stayed for the next five years. That winter and next spring the 'flu epidemic was rampant. With O'Donnell's driving team I drove Dr. Arthur Day around the country, and at times it was around the clock, to attend people who had the 'flu. Come pleasant weather or blizzard, he went for miles whenever he was called. (Incidentally, Dr. Day was an "institution" in Consort district for over forty years.) During that time few families were left untouched by the tragedy. My wife's grandparents lost two sons and a friend of the boys, who was staying with them. One son died on a Sunday, the friend on the following Wednesday, and the other son the next Sunday. Families with 'flu were under quarantine, and neighbors had to do chores and bring food and groceries. It was a time of great co-operation. Grave digging and burial of so many was impossible, so the dead were put into caskets and placed in empty houses until a grave was ready; then only graveside rites were possible. It was a sad time for many families. 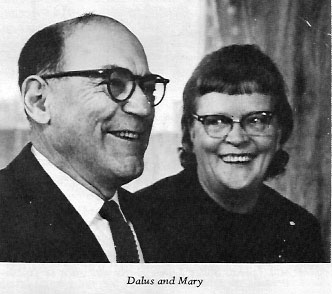 In the autumn of 1923, Ernest Vasey, whom I had met in 1920, had moved his cattle to Frog Lake. He came back to Consort, bought 35 head of horses, and hired me to drive them north to Frog Lake. We (Leslie Fraser and I) left Joe Nolan's place, south of Consort, with the horses in late October. In three days we arrived at Lea Park, the crossing on the North Saskatchewan River, which was partly frozen over. We had to wait until it froze thick enough to carry the weight of the horses. There were a bunch of settlers there ahead of us; they had been waiting two or three weeks for freeze-up. The stopping-house was on the north side of the river, so we had to leave our horses in a corral on the south side and walk across there to eat and sleep. The second day we crossed the horses over in bunches of four or five, so as not to get too much weight on and break the ice. We got them all over by late afternoon, so the settlers decided they could cross. (They were heading for Beaver River.) We decided to help them. We would unhitch the teams, take them across, then tie the wagon wheels together, so they would skid. We'd attach a long cable to the wagon tongue, hook the horses to it on the other side, and skid their loads across. Everyone was co-operating, excepting one fellow. He had a large team of Percheron mares, a cow and calf in the wagon; also a stove and house-hold goods. His saddle horse was tied behind the wagon. He decided to venture across by himself, despite our pleas. He got about half way across, when the ice gave way, and in he went - wagon, team and all. No one felt very sorry for him, but, nevertheless, we cut a channel in the ice the width of his wagon, and helped him make it across safely, but very well soaked. We pushed on and reached Ernie Vasey's that night. 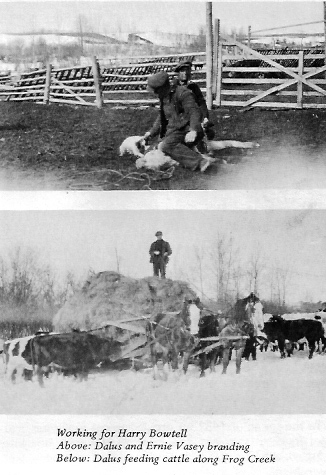 I then went to work for Harry Bowtell, feeding cattle and choring around the ranch. Harry had over 200 head of cattle and a bunch of pigs, turkeys, geese, and chickens, so Eddy Lider and I were kept busy. In the winter I hauled hay from five to seven miles off the Indian Reserve, with a four-horse team and a 12 x 20 foot hayrack. I would put on my load, then start for home. Making a comfortable nest in the hay, I'd tie my lines and put my arm through the loop, then snuggle down for a sleep. My horses would take me home without my guidance. Because of this, my horses would not leave the trail, and sometimes the pungs of those I met were therefore upset. As a result, I was called "The Sleeping Whiteman", Neepah Moonias (phonetic spelling), by the native Indians. 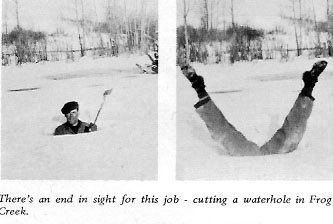 I played hockey for the Frog Lake team. Our entertainment was house parties, card games, tobogganing, boxing, and dances. These took care of our evenings, and, needless to say, we didn't spend too many night hours sleeping. I stayed on that spring and worked for Harry, putting up hay till harvest time at Consort. After harvest I rode back to Frog Lake in time to help Harry drive his cattle to Kitscoty for shipment to Edmonton by train. I spent the winter at Frog Lake between Bowtell's and Vasey's, getting out wood, hauling lumber, and choring.

I spent the next spring, summer, and harvest season in Consort, riding back to Frog Lake to work for Johnnie Verbunker, who had a contract hauling freight for the Hudson's Bay from Cold Lake to Kitscoty, and from Cold Lake to St. Paul. On our return trips we would haul supplies to the Hudson's Bay Company stores at Beaver Crossing and Cold Lake. That winter I played hockey for Kitscoty, when I was at that end of the haul, and for Cold Lake at the other end. Being on the trail most of the time, I didn't have time for much other entertainment. I really enjoyed my years at Frog Lake, and I kept in touch in later years through the Ernie Vaseys, who used to visit us after they moved to Edmonton.

When I left the area I returned to Consort. There, in 1926, I bought a quarter-section of land near Gooseberry Lake. I sold it in 1928, and in 1929 bought a section in the Whitton district. I had the misfortune of losing my barn by fire that summer, so built a pole and straw barn to replace it, and started fanning on my own. In 1932 I married Mary Campbell, a neighbor's daughter, and we spent five years fighting drought, dust storms, grasshoppers, army worms, and gophers. I seeded 450 acres of grain each year for seven years. In that time we threshed one crop, 254 bushels of frozen wheat. We put up Russian thistle, which thrived in profusion. It was cut green and stacked, a layer of thistle, followed by a good sprinkle of salt, for feed for our cattle. This, with at times relief feed, supplied by the government, was the sustenance for our milk cows. They supplied us with the cream, which was hauled by horses and Bennett buggy to Monitor, about seven miles away. It gave us the princely sum of $1.50 per five-gallon can. This, with a case of fifteen dozen eggs per week, at 5¢ per dozen, was our cash income. The relief feed came to Monitor by rail. I had to be in Monitor by 7:00 a.m. to get in line with anywhere up to a hundred teams for my share. Sometimes there would not be any feed on the train, but without telephones we wouldn't know until the train arrived.

In the spring of 1937 we decided to cut our losses, and leave it all to the dust and varmints. So, with my wife and two children (Donald Keith, aged 4 1/2 years, and Dawn Marie, aged 3 months), we left the prairie. We departed in the midst of a dust storm so thick that I had to stand on the running board of a kindly friend's car to guide him out of their yard by watching the telephone wires above the dust line. Once on the road allowance you could stay between fences. We now live at Darwell, about 46 miles west of Edmonton. Our phone is listed in the Seba Beach exchange, so if anyone would like to visit, the welcome mat is out.

Our son, Donald, and his wife, Claire, have two boys. Donald teaches Math at Harry Ainlay Composite in Edmonton. Donald and Dawn Marie Flint, with their two boys and one girl, are in Edmonton. Dalus Alexander and his wife, Sharon, have one girl and one boy. Alex works for Peter Bawden Drilling, and lives in Edmonton. Richard and Marion Buday live in Seba Beach with their family of one girl and two boys. Glenn Stephen, our youngest, is 26 years of age - and still a bachelor. He is loadmaster for P.W.A. on the Hercules and 707 freight planes. He works either in the Arctic or overseas. When in Alberta he lives in Edmonton.