Charles Quinney was the son of Manito-nikik Nakaykiskis, who took the name Thomas Quinney. (Refer to Reverend John and Dr. Elizabeth Matheson. Ch. I.)

My father, Charles Quinney, was a Cree Indian. He was a young man when he first came to Frog Lake, in 1912, from Cumberland House in North-Eastern Saskatchewan. I think he was born at Onion Lake, Saskatchewan, because there are Quinneys who still live there; also he was just a young boy when the Reverend John Matheson arranged for him to go to Emmanuel College at Prince Albert. There he was trained as a teacher and minister for the Anglican Church. The Church decided that a day school was badly needed at the Frog Lake Indian Reserve and the Indian Agent gave consent. Rev. Matheson asked father if he would be the teacher and minister, and pioneer here. Father agreed and in 1912 or 1913 took up field work for the Church at Frog Lake. 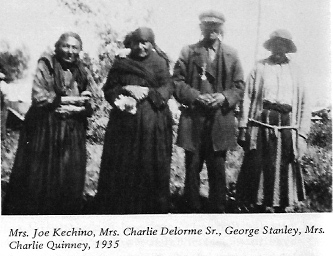 He had already met and married Harriet Sayese, daughter of Batiste Sayese, of Cumberland House and so they came by team and wagon, with their four children. As soon as they could they arranged for their three oldest children, Tommy, Johnny and Angus to attend the Whiteman's school at Frog Lake, a distance of about six miles from where the day school was built.

Father had the school built without any financial help from the Government. It was only a shack, situated near the south-west end of Clearwater Lake; later it was moved to its present site. He also built a shack to live in and it was under these primitive conditions that he began his teaching and ministerial career at Frog Lake. He worked hard and made many friends, both Indian and White, who often came to him for advice. One who gave him much encouragement and helped him to keep his faith firm was Reverend (later Canon) Ahenakew. Chief John Horse was also a good friend, being glad that his people would now have a chance to learn to read and write.

Mother, although she had never received an education, was a wonderful help to him and much was accomplished among our native people on the reserve. When people were sick Mother was called on to help, often being midwife. She even helped Dr. Miller at times, as midwife, in the old hospital he had set up in his home at Elk Point in the early 1920's. Father's wages were very low and she helped out by working for the white women in the district; Bowtell, Granger, Franks and others. They depended on her willing hands to do the washing, ironing and general cleaning. I have been told they all learned to respect and love her and that she often cooked their meals, making a delicious venison stew and bannock.

She must have had a large amount of energy, for scrubbing those board floors that most white people had in their homes, and scrubbing clothes, with bar soap, sometimes homemade, on the washboard was hard work. Often she must have been tired when she came home to sew, cook and clean for her own family. She seldom complained, but seemed glad that she could help with the dollar or two she had earned. Sometimes she was paid with eggs, butter, cream and potatoes.

It was a sad time for us in 1924 when Father was taken from us and laid to rest in the Onion Lake Indian cemetery. Then the work that he so hopefully begun was carried on by Alex Peterson.

Mother loved children and raised a large family: Thomas of Frog Lake; Angus (Henry) of Saddle Lake; John of Frog Lake; Freda (Whalen) of Elk Point; Lawrence, who is present Chief of Frog Lake Reserve; myself, Christina (Desjarlais) of Sputinow; and Norman, Frog Lake. She took many others under her wing. After father passed away she was very lonely and in 1938 became the wife of Billy Daniels and mother to his two year old son, Gilbert.

Speaking for myself, and I think, for my brothers and sister, I feel it is a privilege to have had Charles and Harriet Quinney for parents. Mother passed away in 1955 and rests in the Indian cemetery.

An excerpt from "How Grandfather Crossed the Prairies in 1885 - 86" by Rupert Leslie Taylor (Western Producer, February 5, 1976)

GRANDFATHER stayed for "the horse race between Clink and Todd" on May 25. It was a winner take all race and Clink won the side bet of $25 and the loser's pony.

He spent a few days visiting former Headingley people then returned to Battleford and again saw his brother David who "came down from the settlement with his little girl, who broke her arm in falling down the stairs."

On Sunday, May 30, he went to "the meeting (church). Rev. (Charles) Quinney preached in the morning and (John Francis) Pritchard in the evening... Stood godfather for Sandy's little boy Allan Peterson."