I was born in 1906 in Lac Qui Parle County, Minnesota, U.S.A., the oldest of ten children. In the fall of 1911 my parents immigrated to Canada with their four children, Obert (myself), Gudrun, Selma and Walter, landing at Vermilion, Alberta, and finally settling in the Norway Valley district.

I stayed at home until I was eighteen, when I left and went to work in Dewberry, Marwayne and Hazeldine. While in Hazeldine, I met Violet Isert, daughter of Mr. and Mrs. Rudolph Isert, whom I later married. In 1929 I went to the United States and the next year to Juneau Alaska, working in the fish cannery to earn enough money to go to an automobile and welding school in Seattle. I then got a job in Lewiston, Idaho for approximately a year, after which I came back to Alberta where Violet and I were married at Mannville in 1933. 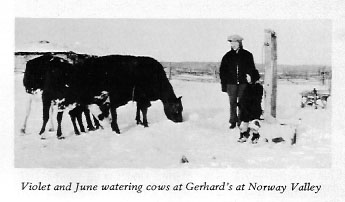 Our first home was in the country near Hazeldine. Later the house was moved into town. Our first daughter, June, was born in the Islay hospital. I worked as mechanic and welder in and around Marwayne and districts. We lived in Norway Valley for a time on the old homestead where I farmed. There were no phone lines so the neighbors hooked up phones on wire fences. June started school in Norway Valley with Gus Brocke as teacher. We spent a very happy time there among wonderful neighbors and friends. 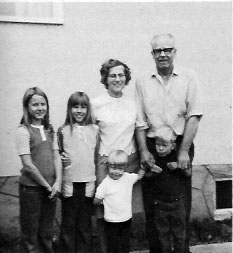 Our only son, Dwight, was born in Elk Point Hospital and our youngest daughter, Barbara, in the Marwayne nursing home which had been previously built as a home by my dad, and where my folks lived for some time. Dwight started school in Marwayne and Barbara in Lloydminster.