Mrs. Lucille Clack submitted the following article, taken from "Memories of Western Brooks" which was published in the August 16, 1951 edition of The Family Herald and Weekly Star. The author, Mrs. Martha E. Graham, lived in the Heinsburg district for several years and it was our privilege to know this delightful lady. Heading her article in the Family Herald and Weekly Star, that editor noted "Articles on brooks are not rare, but it is unusual for a writer to look back over 80 odd years to her memories of them."
By M.E. Graham.

Frog Creek ran beside our farm and I would walk along the shore of the North Saskatchewan and catch fish at the mouth of the creek. I have read that the "Goldeyes have withdrawn from Manitoba Lakes recently", and have moved into the Saskatchewan River. I caught Goldeyes there 15 years ago. I went farther up the Frog Creek to the old broken down mill dam and prowled around the ruins, finding a large hand wrought spike and saw the mill wheel that had been brought from Winnipeg by ox team. It had never been put to use when the rebellion broke out.

I visited William Bleasdell Cameron, the only white male survivor of the massacre, when he had a drug store in Heinsburg. He was still engaged in writing western tales at that time. I also saw the obelisk with plaque, bearing the names of the men massacred.

Not far from Frog Lake are three other lakes, lovely for swimming, fishing and boating. These bear the names of eastern politicians viz Laurier, Whitney and Ross. They are not large but can scarcely be classed as brooks. One picturesque brook was near our home and entered the Saskatchewan River a half mile upstream from Frog Creek.

This creek had a peculiarity all it's own. It is fed from springs in the hills and flows but a short distance before entering the river. We had a well of good water beside it which was protected from the frost in zero weather. The brook froze to the bottom but the springs continued to flow and overran the ice which continued to freeze until it reached the tip of the banks and the bridge which we erected over it. The hill sides were well timbered with willow, poplar and cherry trees.* We had a summer oven built in the shade which made a pleasant place for picnics.

The Saskatchewan River, near its mouth, was also a delightful place for swimming. There was an Island, well timbered, near enough to the shore to make this part of the river seem almost like a brook. The Island too,was often used for picnics. A long stretch of sand mound extended up stream to the nearest bank. I have watched miners panning for gold in it and they also did some fishing, once catching a sturgeon. Below the regular swimming hole were many large rocks and shallows.

Once when the Saskatchewan River was in flood I forgot about the rocks and thought I would take a longer swim with the rushing current. I always swam breast stroke, and when I had gone about 400 yards I landed breast down on a flat rock in midstream. I waded to shore and walked back as the current was too powerful for me to swim back. I have tried to swim from May until October although the water was not noticeable for heat.

After ten years absence I still get letters referring to our good times in the "Running Brooks" and at picnics near their shores and hill tops. 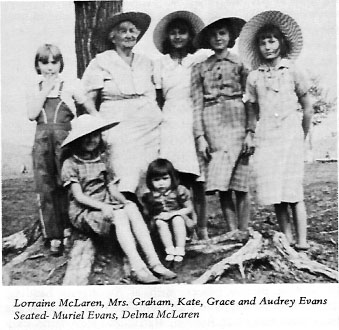