We never know our destination until we get there, and what our destiny will be, but the homesteaders and settlers found this out. Thanks to all of them, for their destiny has given us a better life no matter where our destination may lead us.

In 1911 Alex Lunden, his wife Emillia and son Olaf arrived at Kitscoty, Alberta from Appleton, Minnesota, U.S.A. by C.N.R. Alex's parents came with them and also some of his brothers and sisters. A more detailed story of the family's history will be found in this book on some other page. They brought with them, via box car, a team of horses, blacksmith tools, farm implements, household effects and a few other personal effects. They didn't know it at the time, but their destination was to be Norway Valley, Alberta. Probably it was because they saw that blue haze over the green valley which reminded them of their homeland, Norway. This was indeed beauty and must have brought love to their hearts for this part of Alberta. The spot Alex's parents located was new land, and the terrain was rough, rocky, hilly and there were many trees. This was going to mean a lot of hard work. Alex's father filed on this piece of land for his homestead. They also cleared enough land for growing their grain and garden. This was done for Alex's parents home first.

Now, they had to cut logs and haul them to a mill which was run by a steam engine, and this was many miles away. This was done in the winter time when the weather went as low as sixty below. They made their own sleighs and started hauling logs to be made into lumber, and on these cold trips they had no heaters like we have today. The heating of rocks and wrapping them in blankets served as heaters which kept them fairly warm. When they had all the lumber hauled they built a home for Alex's parents. They had coal-oil lamps for their lighting, and crude wood stoves. When the home was ready they all moved in under that one roof and everything was nice and comfy. Next, Alex and father Olaf decided to build a blacksmith shop, and so a site was cleared in the same manner as before. The blacksmith shop was located on the fringe of the main road to Norway Valley. Alex and Olav were first class blacksmiths in their homeland, Norway, and this was to be of great help to all the homesteaders and settlers for miles around. There wasn't anything that they couldn't do in the line of blacksmithing and even woodwork. They shod horses, making their own horseshoes, and they made plows, and plow shares, tempering the steel, all by hand. The heat was from a hand forge. Many other items were made, too, such as knives, chisels, pliers and many other farm implements for the homesteaders. Then there were repairs to all the machinery and the sharpening of plow shares. Well, you name it and they would fix it or make it. 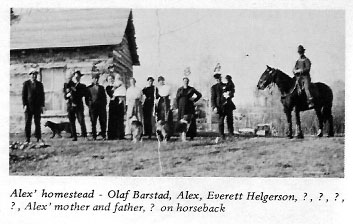 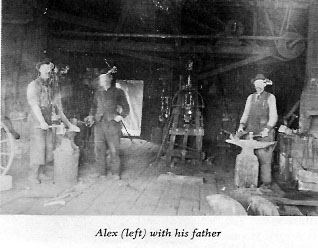 Alex had located a site for his homestead about three miles from his dad's home and the blacksmith shop. He took out papers for this homestead in 1914, and then started clearing a place for his home and other buildings. This meant more hard work and it was all done by hand with the team of horses until all was ready to build. The house was finally built and Alex and Emillia were ready to move in. There were inside improvements to be made, so this was done by the two after they moved in.

All these homesteaders in Norway Valley were happy, even though it was a struggle and there weren't the conveniences as today. Alex walked three miles across country to help his dad with the blacksmithing, and this was his regular routine morning and night, winter and summer. His sister Gertie (Gunhild), who married Everett Helgerson, was not too far away. They took their homestead in Norway Valley too, and they had their share of hard work. They had two boys and two girls. The one daughter died when very young and this left Cora, Buddy and Harold. Visiting was done by horse and wagon, and in winter by horse and sleigh, but many times they would walk. This was done when they visited their neighbors, too. The early homesteaders were some of the greatest because they co-operated with one another and the women along with their husbands shared their lives fifty-fifty. The Frog Lake Reservation located north of Norway Valley, and noted for its history from the Reil Rebellion, had many friendly Indians who were good friends to the Lundens and other homesteaders. They traded with Alex and his father for their blacksmith work and sometimes for food. They would bring berries and lots of wild meat. This way they helped one another and this was very valuable in those days.

Alex and Emillia had three more boys between 1914 and 1921. They were Edward, Ralph and the youngest, Haakon. There would be so much more to tell about these homesteaders, however, I am the youngest and it wouldn't be proper for me to write an immigration story. Alex and Emillia and family sometime later found themselves located in Dewberry, Alberta. Alex put up his home and blacksmith shop, and was there for many years, until he retired and moved to Edmonton. Many will remember his skilled blacksmith work and I am sure he will come back in memory to many. He died in 1958 and his wife died in 1970 in Edmonton. Thanks should be given to all these early homesteaders, respectfully, and to the ones who are still with us. May this book bring back golden memories.