My father, William Jamison, was born at De Winton, Alberta, April 9, 1889. He was one of the younger of a family of twelve born to Irish parents, and lived there until he came to Frog Lake in the spring of 1910 with the firistows. He homesteaded a mile north of the Bristows on Section 30, Township 56 Range 3, west of the 4th and worked with them in a sawmill getting lumber for his home which was the first frame house in the district. 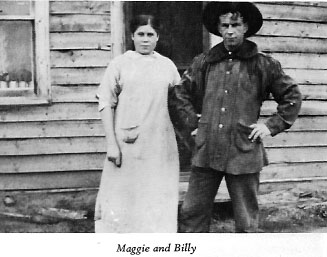 On June 24, 1914 he married Margaret Bristow. They were known to all their friends as Maggie and Billy. During the first years of their marriage Father worked for a time for Harry Bowtell herding cattle. Later he worked for Mohammed Rahall who owned the store at Frog Lake, sometimes in the store, but usually hauling cream to Vermilion and bringing freight back. Mother quite often helped in the store, too.

Father had a lovely driving team and used to drive people around the country looking for land. Sometimes he would even drive the police around looking for a moonshine still. One of these horses, a black named Nigger, my mother used to ride for mail and to visit her friends.

I arrived on my mother's birthday January 17, 1924. I'm told it was 60 below that day. I like to think it was the weather and not I who stopped them from having more family. 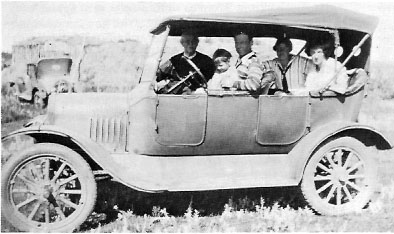 Their first new car, bought in 1920, was a Model T Ford and both of them drove it. In the 1930's they couldn't afford to drive it so took the engine and top off and made it into a Bennett Wagon which was pulled by horses. Their next car, a Model A Ford, was purchased somewhere around 1935. It was not a new car but was new to us and we were thrilled with it.

We had a blacksmith shop in our yard where my father did most of his own work and also for neighbors. I remember him leaving the field many a time and coming in to sharpen plow shares or repair a broken part for someone. He also had a wood sawing outfit and a grain crusher which he used to take around the country sawing wood and crushing grain, sometimes being away for days at a time. 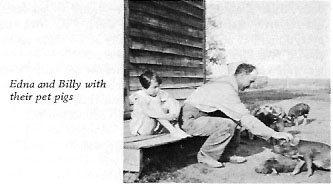 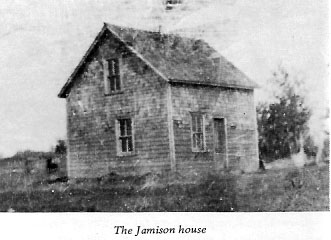 For years he was Secretary-Treasurer of the Frog Lake School District and I can remember when it was time to hire a new teacher how he and the trustees would sit up till the wee small hours going through applications. One time in particular they had a big wash tub full of them. The books were taken to an auditor at Lindbergh once a year to be audited. One spring Bill McMullen was taking him and they nearly drowned while crossing on the ice between Laurier and Whitney Lakes.

My mother was a lovely seamstress and made all my clothes, most of her own and also sewed for friends. She helped with all the outside work as well. Once she cut her leg badly while cutting brush. I remember riding on the binder for hours with her or setting beside a stook while she stooked grain in the fall.

Being an only child life often got rather lonely and how I loved it when friends dropped in on a Sunday and we'd make ice cream. Mother made delicious ice cream and Father was always willing to turn the freezer as he loved ice cream. Every winter we filled a little shed with ice just for this purpose. When school ended in June and the day of the picnic arrived all the children would bring milk, cream, eggs, sugar, etc. and Mother would make the mixture and Father would spend the morning turning the freezers. Usually some of the children would stay to help turn them.

Father was very interested in community affairs and it seemed he was always president or secretary of some organization. He was very active in the building of the Frog Lake Community Hall and was president for years. He was also president of the Casket Association which was formed about 1940 and, ironically, he was the first to use one of the caskets when he was killed in a farm accident April 20, 1942.

The neighbors were wonderful that spring; ever so many came for a couple of days and put the crop in. I'm sure Mother and I could never have managed that year had it not been for the help of Archie Dewey who came to our rescue many a time. For health reasons we sold our farm in the fall of 1942 and moved to Edmonton. Mother married Frank Bowtell in 1945 and they lived in Edmonton until she passed away February 3, 1968 and he died June 5, 1968. I married Louis Eigner in 1948 and we have lived in Edmonton ever since. We have two daughters, Joan and Fern.