I have vivid memories of the many trips my dad took to Kitscoty, hauling pigs, grain, etc. He would dress in his warmest clothes, put on his buffalo coat and mitts, climb on the load, and was off. Mother always sent a good lunch along, including Jack's favorite oatmeal cookies, as they never froze solid. The trip always took three days - Jack Johnson's (south of Lea Park) was the stopover house, both coming and going. We three kids and Mother looked forward to Dad's return, for always there was some surprise. The time the gramophone arrived was an especially happy one - many dances in our kitchen after that.

Cribbage parties including McGowans, Jenners, Sillems, Holmes, Jamison and many more were a delight for all, and helped to pass the winter. I won the booby prize the first time I played. It was a long necklace of candy beads. I never forgot that. One evening we were going to Jenner's

"Are you coming, Jack?" "Well, Myrt's going, so I guess we all have to go." So we did, and had another very enjoyable evening. Mrs. Jenner on the piano and Mr. Jenner playing the whistle. We kids were playing out in the kitchen - getting a bit rowdy, I presume, for Mrs. Jenner called out, "What you break you pay for!" Such jolly times.

The gratitude of Billie Daniels was profound when he saw the casket my dad made for his first wife, Eliza. Mother dyed sheets black for a covering. When lined and finished it looked quite professional. Ethia baked her first pie for Billie Daniels when he was cutting brush for us. She remembers it was rhubarb, and he claimed it was good. Now she wonders! She remembers Grandma Bristow telling about her and Jack going ahead to pick out a place at Frog Lake; Mother, George and I remained at Strongfield, Saskatchewan. They picked about the rockiest place in the country. Mr. Gillett said Jack made a Monument to himself in the stone fence he made from rocks picked out of the fields. It is, in some places, higher than fence posts, and marks the south line of the quarter for almost the half- mile. The fence has been built by careful placing of the rocks in position, but later owners tossed rocks behind it. Jack used a pail and picked even the smallest of rocks. He estimated one time that he had spent a total of five years of his life building the fence with the help of George. Jack also used dynamite for blasting rocks. He'd tell the Granger children where he was going to put the rock, and when the blast was over, most of the rock or the largest piece would be where he said he would put it. 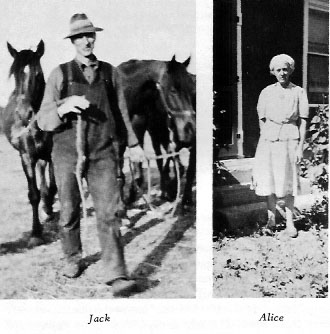 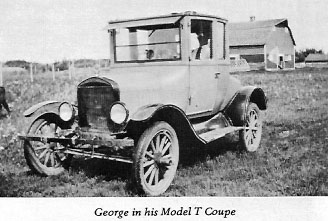 Of course Grandma Bristow and Jack went to see the monument, and apparently saw an old bone that Jack declared belonged to one of the people who had been killed. Anyway, when Grandma got back to Strongfield, here was the bone in her suitcase. She promptly mailed it back to Jack, so all the fellow's bones could be together. I know they were always pulling tricks on each other. Grandma laughed when she told me Jack said he didn't want to be seen riding with his mother-in-law.

Ethia said one thing stood out in her mind. Jack Litchfield got the first radio in that part of the country. He ran the store at Frog Lake then, and one evening he invited us down to hear the radio. This was a real event in our lives - to hear something like that. However, radios in those days were highly unpredictable, and that night not one thing could be heard but squeals and screeches. Mr. Litchfield felt bad, but we kids thought it remarkable that any noise at all could come out of that box.

Jamison's was our second home when Mother had to take those long trips to get dental work done. How we kids liked to stay with "Billie and Maggie!"

Ethia also remembers when she and Anna Kraft used to make the fires at school in the morning because they got there first. They used to be about frozen, as they had to wade through snow up to their waists. There was no trail to speak of back of Bristow's. After a couple of years the school board decided to give them the big sum of 10c/ per morning. Before the school was moved, we boarded the teachers. I well remember Mr. Johnny Rule and Mr. Banks. 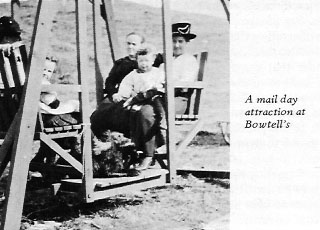 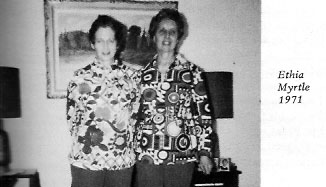 I quite often took my folks riding in our Model T coupe. Jack never wanted the windows down; didn't like "the damn draft around my head." I'm much the same. He never did say he was nervous of my driving, but, arriving home one day after a muddy, winding trip, he said, "Well, we made it that time!"

My dad had the Land Office in the early days. I remember many people coming to our place and up they would go to the office upstairs. Many people in the Green- lawn and Riverton areas have told me they signed up for their homesteads at our place, and can remember us kids running around.

We used to swim, and even go boating, in the horse trough on our slough. One Sunday morning I took Ethia out boating. Something went wrong, for we upset. That wouldn't have been so bad, but Ethia was wearing the lovely knitted dress that Aunt Ethia had made for her. Well, the dress stretched right down to her ankles. We couldn't help but laugh, and even Mother could see the funny side, for which I was very thankful.

Ethia remembers one New Year's Eve the Jenners and Mr. and Mrs. Granger came to spend the evening at our place. She thinks it was before we had a radio. Mrs. Granger brought some candied fruit, as she was a great one for adding a fancy touch. Everyone was busy playing cards, and suddenly Jack said, "Happy New Year, everybody!" Poor Mrs. Granger said she was planning all evening on being the first to wish everyone "A Happy New Year."

George got a bang out of teasing Ethia and me. When the folks would reprimand him, he would say, "I wish I had never been born - or else there had been another boy born, too." One Christmas Santa brought him a doll, as he always took our dolls. Well, he threw that doll as far as he could throw it, and never did touch our dolls again.

There was a well-worn footpath between our place and Fred Bristow's. It led through our hog pasture, over the fence where the rocks had been piled, and through their cow pasture. Many a time we would look up to see Gertie or Anna coming over, and it was just a little run over to see them.