Knut Vinge, Oscar's father, from his first marriage in Norway had two children, Alec, and Helen, who later married Ole Tweed. After their mother died he married Thora Solveig, a midwife, who passed away in 1910, leaving him with four more children.

Sometime in 1911 Knut moved from Raymond, North Dakota to Norway Valley. He brought with him his daughter Della, 15, and Oscar, 13. Two older children, Ruth and Clarence, stayed behind. I do not know when Ruth and Clarence moved to this area, but many people will remember Clarence as a fine friend and neighbor. He passed away in 1965. Ruth married Ole Anderson and presently resides in Marwayne. Della, married to Bill Andrews, lives at Meadow Lake, Saskatchewan. 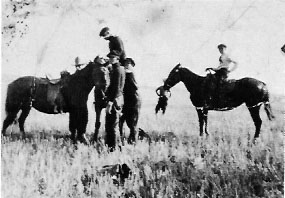 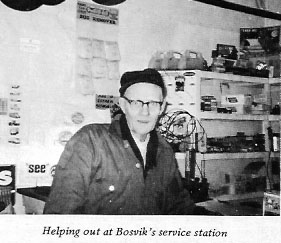 Through the years Oscar worked at various jobs and in many locations in the surrounding areas. He worked at a livery barn and poolroom in Kitscoty, for Harry Bowtell, at the Ponsonby Ranch at Tulliby Lake, and on the Sonley farm at Marwayne. In 1926 he went to work for Ed Klinkner, who had married Claire Crook. Ed had a store at Lea Park and Oscar had a room above it. Besides helping at the store he hauled the mail, hauled cream from north of the river to Kitscoty, and with Ed's large truck hauled grain and gravel for two summers.

Neva, Claire's sister, came to help her with their family of small children, and this is how she and Oscar met. They were married on July 8, 1931 at Elk Point in the home of the pastor, J.B. Lorenson. Knut made his home with them until his passing in 1936 at the age of 81. Oscar had helped build the Bethel Lutheran Church at North Park and was actively involved with the Norway Valley School. He could tell many a story concerning the school, as well as other facets of life. Once when Doctor Ross came in his Model T to see a sick Kleven child Oscar had gone along to direct him. The car was left on top of a hill and they walked down. When they came back and cranked it, it took off down the hill by itself. This took place in the ski jump area, so it's easy to understand how it happened. 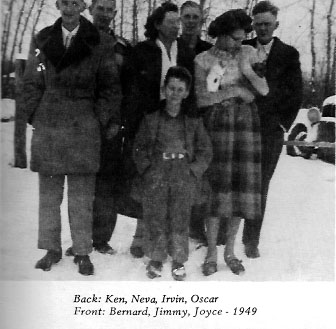 Through the years five children were born: Bernard, Irvin, Joyce, Ken and Jim. In 1949 Oscar was seriously ill and was operated on for a perforated ulcer. This cost him a long stay in Lloydminster hospital. He had begun buying livestock in Heinsburg in the 1930's and except for a year off in the 1950's he continued until the station was closed out in 1974. He made many a trip to Elk Point with animals he had purchased. He wasn't above letting his visiting grandsons get into the pig tatoo, either. Once when I was ranting at Kenny Jr. I turned around in time to catch that little smile on Oscar's face.

In 1955 the family moved into Heinsburg, taking up residence in the former Imperial Lumber Company house. In 1967 Oscar became assistant postmaster, and two years later took over the rural mail delivery. He continued to drive until September 1974, when illness forced his retirement. He passed away from cancer on November 6 of that year. His funeral was held at the same church he had helped to build, and it was full to overflowing with his friends, neighbors, and relatives. This was the greatest tribute that could be paid to a wonderful man. He left a void in the history of the area, and in the hearts of many; but he also left a heritage of hard work, fellowship and love to all of us.

Neva still lives in the same house in Heinsburg. Of the five children, Joyce and Jim are closest. Joyce married Mike Nychyporuk of Roblin, Manitoba, once barge captain on the Mackenzie River. They bought the former Imperial Lumber building from Benny Kates, where they now operate "Mike's M & M." They also sell propane, buy furs, and handle fence posts. Recently when Mary Kapjack sold out they purchased her store, and now sell gas from those pumps. Home deliveries are made from a bulk station located at the site of the last stockyards. They have two boys who have finished high school, and one daughter.

Jim and wife Rosemary (Culford) live with their three children at Riverview townsite. Jim is employed at the Salt Plant and either he or Rosemary haul the R.R.1 mail. Irvin is a mechanic, helping to keep the City of Edmonton buses running. He and wife Ruby (Twarog), and three children live in St. Albert. Bernard is a Unitarian minister in Vancouver, where he lives with his wife Marilyn (Troop) of Calgary and their two children. Ken and I have three children. We live in Calgary where he does elevator and escalator work for the provincial government.

In closing, let me say that I'm sure there are many people who knew Oscar better and longer that I did. If I've made mistakes, and left out things that should have been remembered, please accept my apologies. I live too far away to do proper research, and I don't know the people who knew Oscar best. I'm sure that everyone will remember, in his or her own way, what Oscar has contributed to the area.