THE JENNERS OF INGLENOOK

- as told by Harry G. Jenner

Harry Martin Jenner first set foot on Canadian soil in 1911. He came from Ash, County of Kent, England where he was born in 1881. There, he received his education and became a cooper by trade, that is, he made and repaired wooden barrels; a trade that was a big help on the farm at Frog Lake as water often had to be hauled and stored in wooden barrels. When they stood empty and happened to get too dry they fell to pieces. Dad was one of the few farmers who could put them to-gether again so that they would hold.

In his spare time in England he learned gardening and entered his vegetables and flowers in exhibitions, at one time winning an engraved silver cup. This cup, which I still have, was given for winning first prize three years running. If Dad ever had a hobby it was gardening.

On November 4, 1903 he married Elizabeth Sarah Tildesley of London, born in 1880. She was working as a barmaid when they first met. Those days, in England there was very little choice of employment for women of limited means and education, who had to earn their own living. Dad always called her "Doll" because she was so tiny and cute, barely reaching his shoulder. He said she was fourfoot-nothing. 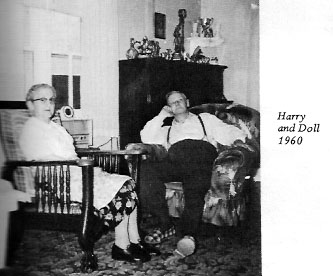 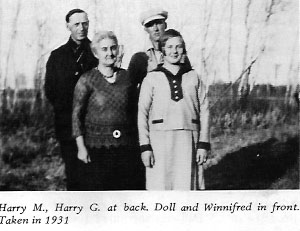 Dad had always wanted to own a piece of land so when they heard of a place in Canada called Stettler, Alberta they decided that would be their future home. He left England in May 1911, intending to send for Mother and I the following year. On arriving in Edmonton he mentioned that he planned to farm at Stettler; he was advised that the area was too dry for farming to come north-east to the

south side of the North Saskatchewan River. He came by C.N.R. to Kitscoty and got a ride out to Lea Park, where he was given more advice; this time to settle north of the river as the railroad was coming through soon and a homestead would only cost ten dollars. He came to Frog Lake and applied for the N.E. 6-56-3-W4th. He was told the requirements wereâthat he must live on the land for six months and break ten acres in order to prove up on the homestead.

He bought a team of oxen and with an oak-beamed breaking plow, broke the required ten acres. He then set to work to build a frame house. He took out logs and had them sawed locally. Ed Durett was the main carpenter. He had land near Laurier Lake and was pretty handy with hammer and saw and helped build several houses in the district. He finished the inside walls with V-joint that Dad hauled from Kitscoty.

By the latter part of June he decided it was a lonely life in the bushland of Frog Lake and the house was ready so he sent for Mother and I.

We left England on July 7, 1911. Mother often spoke of that voyage across the Atlantic and of being horribly seasick. She told, too, how frightened she was one day when she had to hunt for me on the boat and found a sailor carrying me half way up the mast.

After Mother came out, and perhaps because they a little homesick for England and English customs, they named their Canadian home Inglenook, which means Cosy Corners, after their home in County of Kent. One English custom they kept was stopping work for a cup of tea each afternoon. Dad loved gardening and kept us well supplied with fresh vegetables in the summers and Mother canned them for winter. She also canned the wild fruits that she picked.

A man named Mr. Cowdell (not sure of the spelling) left his homestead which joined ours on the west. He wasn't cut out for a farmer and became discouraged and let his land go. He went to Calgary where he worked for Cooper and Cooper Wholesale. He made one visit back here in about 1945. Dad made an agreement with the government to keep the taxes paid and use the land as though it was his own.

After the 1914 war broke out prices skyrocketed. Bryce Crawford joined the army and we bought a team of horses and harness at his sale for three hundred dollars. Dad took a five gallon can of cream to Heins' store; they hauled cream from their store to Vermilion. A week later he took in another can of cream and found the first one still sitting there because the ice was breaking up and the river impassible; when the cream cheques finally arrived they came to seventy cents per pound of butter-fat. The two cans brought fifty dollars. The stale cream brought the same price as the fresh one.

Mother and Dad both loved music. Mother was an accomplished pianist and they bought a piano from Mrs. Bess Edwards (later Mrs. Phil Sillem) of Calgary. Dad had a good baritone voice so they did their part to entertain their neighbors as well as being active in church and other community activities. School teachers and ministers boarded with us.

In 1914 or 15 Dad was appointed Justice of the Peace and Esquire was added after his name. Soon afterwards small pox and measles broke out on the Frog Lake Indian Reserve and for six weeks Constable Birchall stayed at our place to enforce the quarantine, making daily trips over the reserve to make sure the Indians had enough rations and were keeping the quarantine. Happily the diseases were kept within bounds. Dad was J.P. for about ten years.

In 1918 my sister Winnifred was born. Mrs. Sillem was midwife as no doctor was available. It was nice to have a little sister even if she was twelve years younger than I.

We escaped the flu that caused such widespread panic after the war. Luckily we were fond of onions and mother prepared them, fried, boiled and raw, to go with all our meals. She always said that was the reason the flu passed by us. She made an onion syrup that was quite effective for coughs and colds. We also used a homemade cough syrup made of brown sugar and raw turnips.

I believe it was the fall of 1919 when the snow came on the eighth of October and never melted until May. The grain was uncut and any that had been cut was still in the fields in stooks. They weathered that winter in spite of the shortage of feed and cash. They started raising a few head of Holstein cattle and increased until they had a nice little herd of milk cows.

In 1928 we could really look forward to the railroad coming. It was eighteen years since Dad was told it was coming soon. I rode on horseback down to where they were laying the ties and saw them marked 1928. The building of the railroad brought in workers and several farmers earned extra cash cutting ties. The arrival of the first passenger train in 1929 was celebrated with a dance.

In January 1932 our twelve year old Winnifred became ill. Her appendix ruptured and she passed away in less than a month. That was a sad blow.

We struggled through the depression years, managing to keep the milk cows although prices were very poor. One fall an early, heavy snow storm caught the stooks unthreshed. We had changed from stack-threshing to hauling the stooks directly to the machine. Dad, fearing another hard winter, hired an outfit and used sleighs to haul the bundles from the fields. The grain got threshed but began to heat in the granary. We tried to stop it heating by shovelling it from bin to bin, a dangerous job because heating grain is very toxic. However it all spoiled and had to be discarded. By then the Government had formed the Canadian Wheat Board and each farmer was allowed to sell only a bushel or two per acre on his quota. Damp grain was rejected at the elevator.

They sold Inglenook Farm to Exie Sharkey in 1946; bought the Gib Evans house which is located near the river bank in Heinsburg. There they spent their retirement years and Dad passed away in 1961 at the age of seventy-nine. Mother reached the age of ninety-one and passed away on February 15, 1971. Inglenook Farm belongs to Elmer Bristow now, but no one lives there. 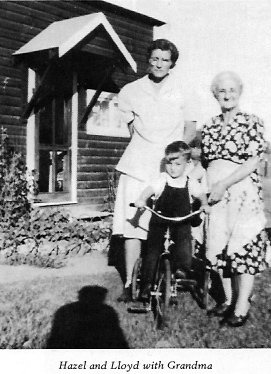