It is October 1, 1974 and Olaf Lunden is celebrating his 87th birthday. Olaf is still a tall, straight and stalwart man, with few infirmities. He lives in Mount Vermon, Washington with his sister Sigrid.

Sigrid is the grand old lady of the Gunderson family, the widow of Gerhard Gunderson. Their story will be found elsewhere in this book. 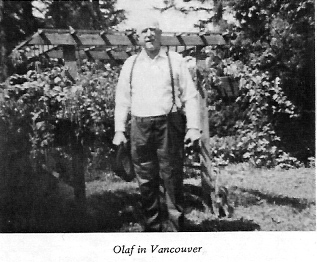 Olaf likes to reminisce about the old days when he and his brother-in-law, Everet Helgerson came to Alberta with an immigrant car in 1914. An immigrant car was a railroad boxcar which they commissioned in Appleton, Minnesota. It was loaded with everything considered most necessary to start a new life in a wilderness. There was farm machinery, stoves, and household goods. Also partitioned off in the car were five horses and six heifers, all of a good milking Shorthorn strain.

The immigrant car was to be unloaded at a siding in Kitscoty. Olaf and Everet booked in at the town hotel and there met two men who were to mean a great deal to them. Olaf Barstad and Ole Olsen were there from Lea Park.

They offered to stay over another day and help unload the immigrant car.

Olaf tells about the strength of these Vikings of the bush country. They were Telemarkens and came from near Kviteseid, Norway where Olaf and all the Lundens were born. They would grab a piece of machinery, like a binder, one at each end, and carry it out as if it were matchwood, Olaf, who was no slouch himself, says he was almost afraid when he saw the power of these men.

After the unloading was accomplished in quick order, the caravan pulled out for Lea Park. It mush have been an interesting sight to see âsome horses pulling farm machinery, others the wagons loaded with house-hold goods, and the cattle tied to the wagons. And helping with the driving were the wivesâGunhild, wife of Everet Helgerson, and Hilda, wife of Olaf Lunden. They all talked and laughed and sang on the twenty-mile journey to Lea Park. Those were happy days.

Ole Barstad invited Olaf and Hilda to spend the night with his folks who were from Seljord, Telemark. They and their other children, Anne and Eivind, made the immigrants feel real welcome in Canada. Ole Barstad later was married to Olaf s sister, Gudrun, and that is another story found in this book.

The next day they pulled out for Frog Lake, another twenty miles north. The journey was slow as there were so many Norwegians to greet on the way, especially in Norway Valley. There were some old timers like Benson and Mrs. Vraalsen, and Knute Vinge. Vinge had lost his wife and was batching with his boys Oscar and Clarence. In talking, they discovered that Mrs. Vinge had worked for Olafs mother when he was born in Kviteseid, Norway.

Knute Vinge's grandfather was Osmund Olayson Vinge, the celebrated writer from Telemark. Knute also had the gift, and composed many poems, especially about life in the north country. In later years. Olaf composed music for one of them which is still his favorite. It is titled "The Homestead Song" and sings of the joys and sorrows and hardships of life on a homestead in Alberta. Olaf still sings many of these songs.

To get back to his story: Olaf and Hilda stopped on the way to Frog Lake to visit with Gerhard Gunderson and his family. They had come to Canada in 1912, having lived in Vermilion for awhile before homesteading. You can imagine there was much visiting and feasting, as Gerhard's wife Sigrid was Olafs sister and their children Obert, Gudrun, Selma, and Walter were very dear to them. Gerhard had built a log house and barn, so there was plenty of room for the visitors to stay until they could get located.

Gerhard went with Olaf the next day to look over the land. After looking over miles of territory, Olaf found a quarter up near the Frog Lake Indian Reservation which he liked. It had good soil and was quite flat, and willows and poplars grew in abundance.

It developed that the quarter had been homesteaded by a couple from Minneapolis named Allen who had built a small house and then cancelled out without proving up for the required three years. Therefore it could be filed on again.

Now the question was if Hilda would like the place as a new home. The next day Olaf took his wife up to the place and as he says, she fell in love with it. They planned the house and barn they would build, the fields they would clear, and the crops they would grow. They felt so lucky and glad that they sang lustily as they drove back that evening, after going over the land from corner to corner. Singing was an important part of homestead life. It helped make the work light. The spirits soared as they sang their Norwegian songs. One of Olaf's favorites, roughly translated, was "This is the land for me and mine. This is the land I have longed for." 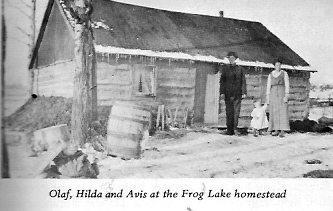 They lived that first winter in a rented house right across from Bill Jamison and Maggie. They were fine neighbors. Bill had come up to Frog Lake with Mr. and Mrs. Bristow, who had a large family of five boys and four girls. Maggie was one of the girls. She and Bill were married about the same time Olaf and Hilda moved into Otto Martin's house across the road. As this was only two and a half miles from his homestead, it was handy for Olaf to get his work done. He broke up ten acres that first spring and rented 35 more from Dave Bristow. The Bristows were most helpful. Old Mr. Bristow said, "You use my gang plow. You have enough horses. Get seed in the ground as soon as you can."

That first year gave a good crop which Olaf took to the elevator in Kitscoty. With money in his pocket, he was able to provide ample groceries for Hilda and himself and their little daughter Avis, born that year. The heifers brought from Minnesota all had calves and most of them were heifers, so they had the beginning of a good milk herd. They were able to sell butter and cream to the Heins store seven miles away. This helped with the grocery bill. (Mrs. Heins tended the store and Mr. Heins freighted groceries from Vermilion.)

Later Olaf was able to sell butter and cream to the Indians who were very friendly. The first one he met was called Fryingpan. How they met Fryingpan was rather humorous. Hilda had taken the horse and buggy and was going over to Harry Bowtell's who ran the post office, store and telegraph office. The road was merely an Indian trail then, with mudholes and rocks of all sizes. It wound across th reservation and around Scotty's Hill. She had got to this point when a front wheel went into a big hole and broke. In this bad predicament, an Indian appeared out of nowhere with a handy ax on his belt. He jabbered in Cree as he fashioned willow sticks into spokes and soon had the buggy in shape again. He couldn't speak English but repeated, "Hwa hwa! Miasjen maniasskwa!" which meant, "Hello! I will fix your buggy." While Hilda went on to the post of

fice, Fryingpan came over to the homestead where Olaf was putting up a rail fence. He greeted Olaf, "Hwa hwa! Maniasskwa pikkepayou!" Olaf repeated it after him, which made Fryingpan laugh and he helped carry rails. Olaf couldn't understand what he was saying until Hilda came home and told her story.

The years were busy and rewarding. Little Avi's was walking and in 1916 a son, Omar was born. More ground was cleared and broke to crop and the farm prospered. The war in Europe had brought high wheat prices and everything looked good.

Then the papers started telling about a flu epidemic of the worst type that had started in Spain. Many people were sickening and dying of it in Europe and on the East Coast, but nobody thought it could come to the wide open spaces of Alberta. But it did. Returning servicemen must have brought the virus with them and it swept over the land like an evil fog. Neighbors were reported sick in bed and one day Hilda came down with the dread Spanish flu. Then little Avis sickened and within several weeks both were gone. The tragedy shattered Olaf for many years and he never remarried. However, he hung fast to his land and the years mellowed his life. Omar grew up to be a fine lad and squired a Frog Lake teacher whom he married.

Omar and Ruby now live in Vancouver, B.C. where Omar is in the hotel business. They have two boysâ Duane and Gary. Duane lives in Vancouver and works in the library. Gary is married and they have six children, two of their own and four foster children. Gary is in business in Kamloops selling modular homes.

Olaf retired some years ago and leased out his farm. Finally, five years ago, he sold it to Arnold Barstad and, as Olaf says, "He has the finest farm in Frog Lake."