BIOGRAPHY OF WILLIAM AND MAGDA KRUCIK

Our father came to Canada in 1907 from the Ukraine. He settled in Winnipeg for two years, then left for a more northern part of Manitoba, a village called Angusville, close to Russell. There we lived on a farm for a period of five years where Dad farmed and worked out.

In 1912 he took the train and came to Alberta looking for a piece of land called a homestead. He did find one, the N.E. 1/4 of Section 14-56-5-W4th Meridian. Then he went back home to Manitoba where he took work again that winter.

In the spring of 1913 (April 15) he sold his little holdings there and took the train for Alberta with his wife and family of six children. We came to Islay where we got off and were met by Bill Makohin and Sidor Hyra who took us out to our homestead. That meant a drive of some thirty- eight miles over prairie trails. We stayed at Bill Makohin's a couple of days while our cabin was being built. There started our new life in Alberta on our own piece of land. d bought a team of oxen from Jim Montgomery and two ws from Bill Makohin. Then he bought a wagon so we d our own transportation. It used to take us four or five ys to make a return trip to Islay or Vermilion. 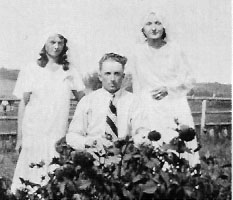 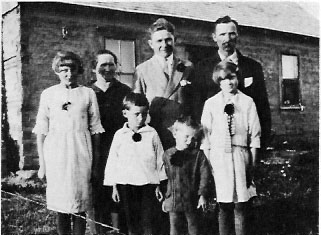 Our district was called Primula. Our land was close to Saskatchewan River and we were only one mile from )oswa ferry and a store which was just on the north side the river. The farm was very heavy with bush so it took ny years of hard work to clear a few acres. Dad made it t it took much of his health.

Our parents raised a family of ten altogether. Two died ar in life but the other eight are still living. Olive passed ay while still single and Leona after she had married irris Kuziw. Lil and Zelma, both single, live in Vancou. Walter resides in Elk Point. He and his wife, Mary iwak) had two children. Dan married a Winnipeg girl I lives there. Two of their three boys are still single. Joe I Tillie (Sawak) of Edmonton raised four children. Ernie I Phyllis (Coombe) of Two Hills have a boy and a girl. raid and wife Dorothy (McCormick) had two children. raid has since remarried. Anna married Ernie Clack and is ing on the old homestead. We are quite proud of it; it's m in the family for sixty-three years. They have a mar- d daughter, Betty, in Red Deer with one child. Ronnie, Edmonton, is also married with one child.

By tradition the land was left to the youngest son, Ernie. He sold it to Anna and Ernie, (Clack) and in 1948 they moved to it. Dad and Mother continued to live in their house on the farm until 1951, when they moved to Elk Point. Dad passed away in 1956 and Mother the following year.