I was born in 1905 in Ontario, the youngest of George and Jessie Hall's five children. The others, also born in Ontario, were Rachel, Mrs. Abram Granger; Mary, Mrs. John Davis; Fredrick George, and Sarah (Sadie), Mrs. Glen Maxwell.

Dad, born 1861 in Ontario, was of Irish descent; at the age of twenty-two he married Jessie Jack, born 1864 in Scotland, to George and Mary Jack (nee Gardner). They came to Canada, I believe, when Mother was three.

In Ontario Dad made a living by working in lumber camps. While there someone nicknamed him "Kelly", a name that stuck for the rest of his days. He worked in the camps until he heard that land was cheap in Alberta. In 1911 he headed west with his father-in-law and two brothers-in-law, David Jack and Albert Christ. My two oldest sisters had previously married and Mary and John were living at Tilston, Manitoba; Rachel and Abe had gone homesteading somewhere in Alberta, at a place called Frog Lake. Perhaps that had something to do with the folks deciding to go west, because when the party reached Kitscoty Dad heard that land north of the river could be homesteaded for $10.00. The rest stayed at Kitscoty while Dad and Grandpa Jack came north and joined Abe and Rachel. It was May 1912 when they arrived at Frog Lake and Dad applied for a homestead on N.W. 36-56-4-W4th. There was a delay in getting his homesteading application approved and it was August before he came back to bring the rest of us out west. In 1912 we all left our home in Ontario for the "unknown" in Alberta. Mother and I stopped in Tilston, Manitoba to visit with Mary, the last time we saw her for many years. Dad, Fred and Sadie went on to Frog Lake. After Mother and I arrived we, the Hall family, lived in Abe's granary for a year while Dad and Fred bought a team of oxen and a plow, broke enough land to prove up on the homestead, and built a shack. Dad became one of the best "ox skinners" around. Mother said he had a vocabulary the oxen understood and could get more work out of them than anyone else. 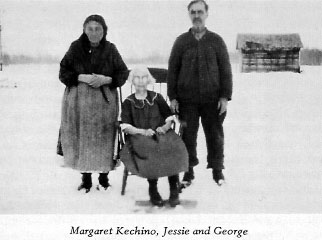 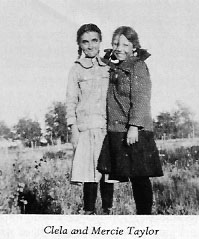 Dad's pet name for Mother was "Jean" although it was no part of her name. She was a quiet, patient little lady and Dad was the opposite. They were middle-aged when they came to Frog Lake and Dad knew little about farming. The living they eked out of the homestead left much to be desired, 'tho the neighbours, always kind and generous, loaned them machinery and gave a helping hand whenever possible. However, he never managed to raise much crop on the homestead.

They raised a few cattle and chickens. Grandpa Jack, who lived with us, owned a buggy and team of little tough ponies called Dick and Toots. Toots lived to be 32 years old. Mother drove them to Heins store with eggs and cream which Mr. Heins and his sons hauled to Vermilion. Later Jack Litchfield purchased the store from Clark and Lewis on the hill east of Frog Creek, near the post office, opened a cream testing station there and hauled the cream to Kitscoty. Almost every mail day Mother drove the fourteen mile round trip to Litchfield's store and the post office, stopping at the neighbours on the way to pick up their letters for mailing and dropping off their mail on her way home. Mail-day was twice a week then.

Their land bordered the Puskiakiwenin Reserve and we made a lot of friends among the Indians. The fish and wild meat they brought to trade for potatoes, eggs, cream and butter made a welcome addition to the meals we prepared on the wood burning cook stove. We were very fond of Little Joe Kechino and his wife Margaret, sister of Fryingpan. They were almost daily visitors; Mother called them the darlings of the community.

Around 1922 we saw an add in a magazine for a home knitting machine, advertising it was a way to make money in the home. Hoping to make some pin money Mother sent for it. It was quite simple to use and turned out a good product. We sold some sox, perhaps enough to pay for the machine, but most local housewives did their own knitting. After I married Fred Messer she gave me the machine but, having little use for it, I traded it to Mrs. Woods (later Mrs. Hank Crook) for a cow. I don't know what became of it. 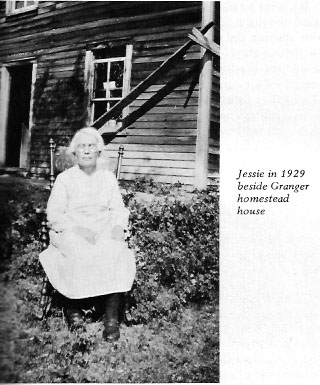 In the mid nineteen-twenties mother was stricken with what she called shaking paralysis, now known as Parkinson's Disease. It was a progressive illness and when she became too shaky to do her housework she had to have constant care. Dad tried to care for her but it was too much for him. They sold the farm and came to live alternately with Sadie and family and me and my family. She was the soul of patience and demanded very little extra attention. I sometimes wish I had inherited more of her wonderful qualities. They were both past seventy when legislation was passed that brought the Old Age Pension Act into being. They passed the means test and received ten dollars just before Mother passed away in 1936. Dad, who never got over her death, passed away within few months.

Shortly before Mother's death, my husband Fred, who was the victim of arthritis, found it impossible to continue farming and we moved to Edmonton. He tried his hand at carpentry but in the thirties work was very scarce so we went to Vancouver. Fred took a course and became a shipyard technician, a job he held until he retired. He passed away in 1972.

Our only son, Samuel, passed away at the age of twenty one. Our girls, Evelyn, Irene, Ruth and Margaret are all married and live nearby in Vancouver. I make as many trips as possible out to Manitoba to see sister Mary, now in her eighties. She and I are the only ones left of the five Hall children. I visited my nephews and nieces at Whitecourt and Frog Lake this summer, the first time I have been back to Frog Lake since I left there forty years ago.