Clarence Vinge was born April 13th, 1903 in Tracy, Iowa. At the age of three he and his parents moved to North Dakota. In 1910 his mother passed away and he was put in a home in Lak Pack, Minnesota. While staying in the home he contacted tuberculosis in his leg which resulted in several operations.

In the fall of 1920 he and his sister Ruth came to Canada to be with their father, Knut Vinge. Their first stop was at Kitscoty, then to a small community north of the North Saskatchewan River, called Norway Valley. there he lived with his dad in a log shack, until in the spring of 1931 he married Avis Krider. The bought a quarter section of land from H. Snaunes. Dad farmed with horses for many years. He worked on the roads with horses in summertime hauling gravel or maintaining. He also had a wood sawing outfit so in the wintertime he sawed wood from place to place. There was very little cash in those days so he had to work out as much as possible. 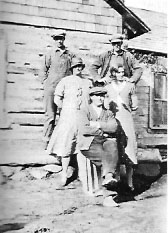 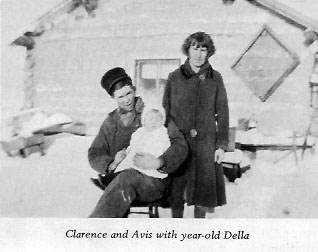 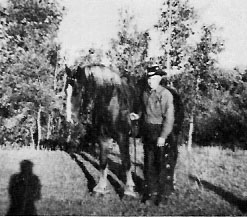 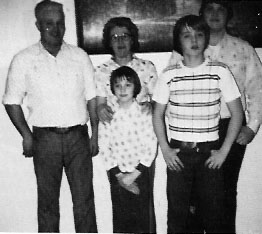 I, Della, was their only daughter; my only brother Lawrence passed away in 1953 at the age of nineteen. We both went to Norway Valley School, two and a half miles away. Mr. Gus Brocke was our teacher. Dad farmed at Norway Valley until 1962, when they sold their farm. Due to ill health they moved to the Heinsburg district where he built a house in our yard. They lived there until he passed away in 1965. Mother is presently in the Rosehaven hospital in Camrose, Alberta.

I married Donald Kjenner on June 28, 1957, and we bought the Ed Rushfeldt farm (N.W. 35-55-4-W4) in the Heinsburg district. We have three sons, Laverne, Gerry and Darren, all of whom are attending the Heinsburg school.