Leonard Courtney Coombe was born in Plymouth, England, on March 14, 1892. He had a variety of jobs as a young boy; for a year he worked as a lathe apprentice at 364 a week, he then worked for Great Western Railways as an engine cleaner. About this time he was contacted by a man in Plymouth who had a brother in New York. The brother wanted to get English boys to come to America to work on farms - and Dad signed up, emigrating to New York in December 1910.

He went back to England for a three-month visit in 1913. He returned to New York and met Eva May Edwards at a house party. They were married at Cardiff, New York on March 29, 1916. The following October Dad enlisted with a Canadian regiment at Syracuse, New York and was sent to Hamilton, Ontario for training. He finished his training at Aldershot, England. He served in the Canadian Army for three and one half years, part of which was in the front lines. While he served in the army Mom, who had formerly been a telephone operator, took a similar position in Des Moines, Iowa until his return in June, 1919.

Mom was the oldest of a family of eight; she was born October 28, 1894 at Jamison, Missouri. She was five years old when the family moved from Missouri to Iowa, and in 1915 they moved to New York state. Being the oldest child she had to help a lot with the younger children and household chores. She loved school and had considerable schooling for that time.

Dad emigrated to Canada in January, 1920 because an uncle of Mom's, Joe Edwards, was already here and recommended it. Also, Dad was eligible for land in Canada through the Canadian Soldiers' Settlement Board. Mona came in March and they homesteaded in the Mooswa area for a short while, then moved to a farm on the west shore of Whitney Lake. They later bought the old Gordon farm. 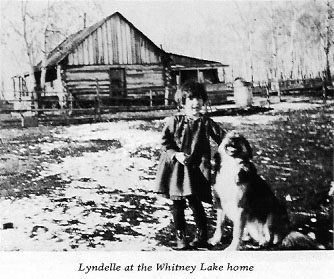 Our parents had many trying times; they lost most of their livestock when they first came to Canada through lack of feed and extreme cold. Mom and Phyllis came down with diphtheria the winter of 1935, the only ones in the community to do so. They were extremely ill and took a long time to recover. There was a huge quarantine sign on the door, so, needless to say, everybody that came to visit left in a big hurry. In the latter part of the 1930's we lost a great amount of stock feed plus our big barn by fire. Luckily we were awakened by a passerby, who then rushed out and let all the animals out of the barn and also saved our harness. Sorry not to be able to remember that person's name. This happened in June, and in October we lost a granary with 800 bushels of wheat in it, also by fire. 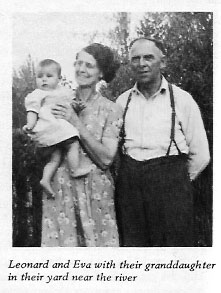 Most school terms the Whitney Lake school teachers boarded with us. We remained on the farm until July 1940 when we moved to Heinsburg, and Dad became the postmaster there. I, Lyndelle, am very glad that I was one of the privileged to have been raised on the farm. I was born April 17, 1921 at Mooswa, where the residences for the managers of the Windsor Salt Plant are now built. I received my schooling at the Whitney Lake and Heinsburg schools. In February, 1942 I joined the Royal Canadian Air Force, was discharged in November 1945, then came back home and married a local boy, Lyle Womacks, on May 9, 1946. We lived in Heinsburg for six years, then moved to Cold Lake, where we remained until 1967, when we moved to Hinton, Alberta. We have two daughters: Cheryl, who was born November 3, 1948, and Denise, born November 7, 1949, both at Elk Point. Cheryl is now Mrs. Michael Morris, and has a little girl named Shona; they live at Hinton. Denise is Mrs. Dan Tait, has a little boy called Jaydan, and lives in Edson, Alberta, where her husband is an R.C.M.P. constable. We have many happy memories of our life at Heinsburg and will never forget our lifetime school pals and friends.

Doris was born on the homestead at Whitney Lake on February 14, 1925, received her schooling at Lake Whitney, Heinsburg and Elk Point, and became a R.N., graduating from the Royal Alex Hospital in Edmonton. She went to work at Raymond, Alberta, where she met and married a boy from Stirling, Alberta; his name being Reed Erickson. They lived at Raymond for awhile, later moving to Lethbridge, where they now reside. They have four children. The oldest, Brian, lives in Edmonton and is taking a lawyer's course at the University of Alberta. He is married and has two girls. Janet is in Brigham Young University in Utah, U.S.A., majoring in music. Valerie and Ross are both still in school and living at home.

Phyllis, born March 18, 1929 at Elk Point Hospital, received her schooling at Whitney Lake, Heinsburg and Ashmont, Alberta. She became a stenographer, taking her course at Alberta College in Edmonton. She married Ernest Krucik, a boy from the Lindbergh area. They lived in Edmonton and Uranium City before moving to Two Hills, where they now reside. They have two children. Rick is in his third year at the University of Alberta, hoping to become a dentist. Janice is in her second year, working towards being a specialized teacher.

Mom and Dad remained in Heinsburg until he retired from the post office in November 1956, when they moved to Vermilion. Mom passed away May 21, 1963 and Dad followed her on June 7, 1965. Both rest in the beautiful Vermilion Cemetery.