I am a naturalized Canadian, born May 1921 in Lebanon. My father - Mohammed Coutney; mother - Krishvi (Hamdon) Coutney. I grew up in Lebanon and married Fatima Nashman, also a Lebanese. By 1952 we had three children, Mohammed, Betty and Selim (Sam). We had often talked of Canada and in 1952 I was offered the opportunity to come to Frog Lake and run the store for my uncle, Andy Hamdon. I landed in Halifax â¢within nineteen days of leaving Lebanon and took the train to Edmonton, Alberta.

When I arrived at Frog Lake I could speak no English. Most of my customers were Indians and I learned to speak Cree almost before I learned English. It was hard to wait on the customers but they understood my problem and we managed to communicate and they helped me learn the languages. I made up my mind that Canada was going to be my home and I even learned to love the cold Alberta winters. By 1954 I had earned enough to send for my family and they arrived in the spring. That winter Fatima got her first taste of Canadian winter and it was one of many bad storms, with blocked roads and long, very cold spells. We soon made many friends in the community and when the children started school in Heinsburg they encouraged their mother and I in our efforts to learn English. In 1956 our second daughter was born and we named her Alberta Anne. 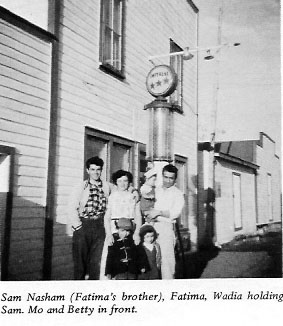 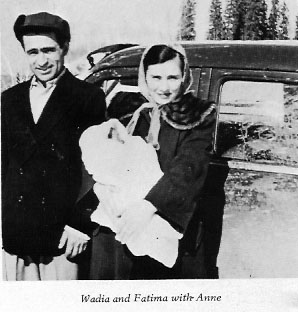 I had a lot to learn: I often worked until two o'clock in the morning stretching the muskrat hides for which I had traded merchandise. The most difficult part of the fur business was for me to learn how to grade the fur. The Indians brought in coyote, fox, lynx, weasel and wild mink as well as the muskrat. I handled about 15,000 muskrats during a trapping season. There was a good demand for furs and various companies sent their buyers around to make us offers. 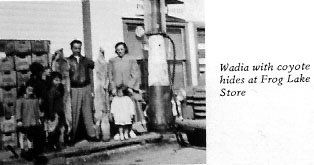 On Hallowe'en night 1961 our son Richard (Ricky) was born in Elk Point Hospital. One of our happiest occasions since coming to Frog Lake was receiving our naturalization papers. We left Frog Lake in 1966 and went to Edmonton. As we could not find a house in the city we stayed with my brother-in-law and had to sleep on the floor for three months. I finally traded my 1964 Pontiac car to a real estate dealer as a down payment on a house. I bought the house on Friday; on Saturday the family I bought it from moved out; I moved my family in on Sunday and on Monday night I flew north to a job in an asbestos mill. The job was in Cassiar B.C. and I worked there for seven months. I returned to Edmonton and worked for the C.N.R. for a year. At present I work for the Edmonton Transit System.

Recently my wife and I returned to the old country for a short visit to our parents. We still enjoy our friends at Frog Lake and visit there as often as possible. This summer we attended the Pow-Wow that was held on the Frog Lake Indian Reserve.