In August 1949 our furniture was once again into a C.N.R. boxcar â destination, Heinsburg. This was the story of our family over the years as we moved from town to town, hamlet to hamlet. Father, being a section foreman for C.N., was destined to move periodically due to other section foreman with greater seniority bumping him. From the Saskatoon, Saskatchewan area he migrated to the Bonnyville Sub-division, where he railroaded for a number of years. While at Boscombe he met and married Emma Pike. Later, while at Franchere, my older brother, Jimmy, was born.

From there Father moved to Camrose, where I was born, and later where Gordon was born. After several years of railroading he decided to move back north. Our destination was Elk Point. In 1945 we were forced to move again because returned veterans were resuming their former positions. We settled at Mallaig where we remained for four years. Next we moved to Heinsburg, because Mr. Greenwood retired, and Father knew the eight-mile section would be easier to manage than the thirteen miles at Mallaig. With our belongings again loaded into a boxcar we drove to Heinsburg in our 1937 Ford car. Mother was not much in favor of moving to Heinsburg. She felt it was so far from home for her, and that it was a sort of "end of the world" idea. I recall that at the time the road was gravelled to the Salt Plant. Beyond, it continued its winding course through trees, sand plain, and creeks. That rutted road was certainly not too inviting! Finally the last three miles returned to a grade-type road, until it descended the river hills into Heinsburg (Hilltown, or often called "Iceberg" by the railway men, because of the cold they endured during the winter). 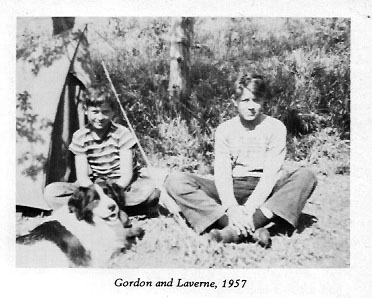 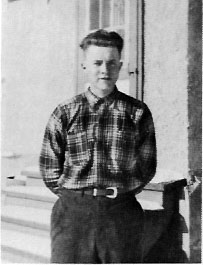 We soon settled down after our furniture was unloaded. Lloyd McEwen and Alec Pacholek, sectionmen, assisted with the move. Lyle Womacks, the drayman, used his one- ton International to move the heavy furniture. Our first shopping trip was to the Co-op store, managed by Oscar Vinge. It even boasted home delivery âby Bernard Vinge. Donald Gregor was soon on the scene to sell us the Edmon- ton Journal or Edmonton Bulletin.

Our family stay in Hein,burg terminated in 1967 when Father retired. During the years we three boys grew up and left home for our various /occupational choices. However, many experiences in Heinsburg will never be forgotten. One was the activity of the railroad in our community. There was daily passenger service as well as one or two freight trains. The station was a bustle of excitement at 8:00 p.m. It was there that many people waited to meet passengers or just to see who arrived, to watch the luggage and express being unloaded, or to converse with the trainmen as to what had happened elsewhere along the line. Because Heinsburg was the end of the line the train crews, in stopping over, added much to the community. The hamlet provided bunkhouses or homes for the railway employees, a fueling station as well as a water stop.

Many a ton of coal was shovelled from boxcars up on the ramp by various men, including Tryg Kjenner, whom we boys sometimes helped. Bill Letowsky, night watchman, employed us to clean the coaches and help look after the locomotive. He even allowed us to drive it ahead or back, to position it either for taking on coal, or dumping ashes on the iron plates between the rails. Those plates prevented burning of the ties. How many times during the cold winters did the various water pipes freeze and have to be thawed out! We used to watch Father and his crew, bundled up as warm as possible (but never warm enough), board their speeder and patrol the track to the west. In later years they travelled well beyond Lindbergh, with temperatures well below - 50° F. Exaggeration? No! It was necessary to see that there wasn't a broken rail and to check the ice at the springs near Lindbergh to make sure it wasn't over the rails.

We boys spent many happy hours in the railway yard, down at the school, or just playing along the river banks. Heinsburg was good to us all. At the present time my folks are retired on their quarter-section farm near Ashmont.

What became of the Wilson boys? Jimmy married Denise Plaquin from Therien. After working at railroading, carpentry, and managing a store, he has settled on a carpenter's trade and works for the Alberta Wheat Pool. His home is at Hughenden. Their family consists of four boys and two girls. Gordon left Heinsburg to become an electrician. After apprenticing with Mike Buck he went to Lloydminster. However, after meeting Donna Stults of Lindbergh, he decided to seek employment with the oil industry. He is presently a field foreman with Amoco Petroleum in Drayton Valley. Their family consists of a boy and a girl. I began my teaching career at Heinsburg school in 1957. After holding the position of vice-principal from 1962 I became principal in September of 1975. In 1959 I married Lila, the only daughter of Thelma and Exie Sharkey. When she passed away on December 31, 1973 our daughter Janet was twelve and our son Trevor was nine. 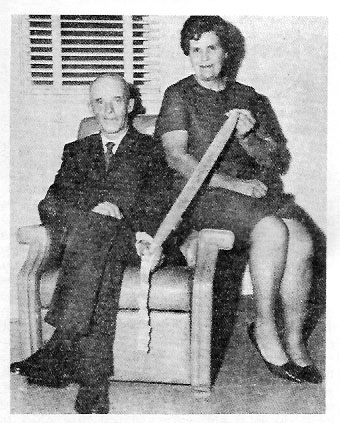 Mr. Jim Wilson and wife Emma of Heinsburg were honored by fellow workers of the CNR Saturday night upon his retirement.

He is seen enjoying the comfort of the chair presented to him for the occasion.

Nostalgia is recalling the fun without reliving the trouble.