HISTORY OF THE NEDâ¢WOMACKS FAMILY

Elmer Edward (Ned) Womacks, born in Illinois, U.S.A. in 1882, moved to Nebraska 1887, then travelled to Wetaskiwin by wagon train in 1894; homesteaded at Gwynne, 1900. Ned apprenticed as blacksmith under his brother-in- law, Jack Curtis (long time resident of Greenlawn), while proving up on his homestead. In 1906 Ned went to Greenlawn (south of Heinsburg) to help the Curtis' get settled. There he met Ruby Ketchum, daughter of Lofton Ketchum, immigrants from Wisconsin.

Ned and Ruby were married at Vermilion in 1909. They drove by horse drawn democrat to Ned's homestead at Gwynne. Here they farmed until 1921 where six of the eight children were born. In 1921 the Womacks family loaded all their belongings into a box car bound for Islay. There they unloaded and hauled their possessions with team and wagons across country to Lofton Ketchum's. Bob, Bill and Art attended Ellsworth School. Their teacher was Mr. Herb Parker. Later Ned rented the Harry Feindberg place and Nichols quarter, the N 1 /2-30-54-4-W4th. where the boys attended Greenlawn School under the supervision of I.M. Faithful.

As soon as the ferry began operation, in the spring of 1923, Ned moved his family to a farm bought from Holloway. Here, while the men were building a log house, Evelyn arrived. Mrs. Sillem was the midwife. This quarter was near the Martin School which the children attended during the summer months: teacher was Miss Dorothy Tennyson. Their address became Frog Lake, consisting of a post office operated by Mrs. Bowtell and Rahall's country store. At that time fences were scarce and livestock roamed the range. Ned and the older boys managed to clear some land and plant enough crop to feed their livestock.

That fall Ned's father died and he found it necessary to return to Gwynne. He left his brother Tom on the farm. Tom lived there until the house burned down; he then moved to Moose Mountain where he traded and trained horses until his death in the forties. Ned found it advisable to stay in Gwynne several years and their youngest son Alvin was born there. 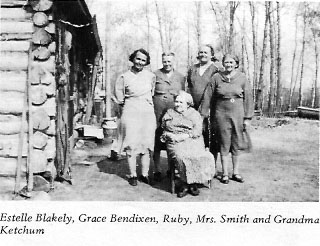 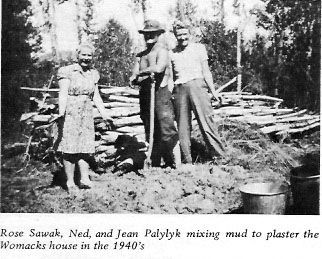 In 1936 Ned and most of his family moved back to Heinsburg, built another log house, and took root again on the farm he had left twelve years before. Evelyn and Alvin went to the Martin School.

When World War II started, Bill, Lyle, and Ben went overseas, and Evelyn went away and trained for a teacher. Ned and Alvin farmed for some time. Later Ben took over the farm; Ned and Ruby lived with several of their children and died in the sixties. They were buried in Red Deer.