John Horse was born in 1873 at Frog Lake. He married Marie Sandfly from Big Island Lake, Saskatchewan. He did lots of hunting, trapping and fishing and life was good. For a long time he had no traps only used sticks to catch fox, rats and bear. He used green sticks or logs and made a trap to look like a log house with a door. There would be a heavy log propped up with a stick to which meat was tied. When the animal came to get the meat the log would fall down pinning the animal to the ground. The traps were built according to the size of the animal to be caught.

Long time ago my grandfather had a trap such as this set north of Frog Lake. He found a white man lying there with a long bushy beard. The white man had looked at it and pulled on the rope and the log fell on his arm pinning him to the ground. He lay there two days before my grandfather found him.

The first store was the Hudson Bay Co. We could only buy sugar, tea, tobacco and sometimes barley flour which was very dark, almost black. The Indians would trade dried meat and fur for supplies. In hard times the Hudson Bay would keep the dried meat and let the Indians starve. No credit in those days. The Indians would help one-another by sharing what they caught with those that didn't have any. The moose and fur would go other places. We would eat just meat. We would wear just moccasins, we had no socks. Indians were strong then, never sick. We would hang meat and fish on sticks to dry to use for winter. 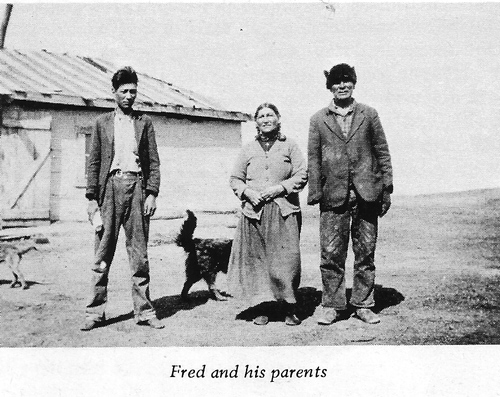 My father made snares from moose hide cut in strips. He wet the strips and twisted them together like a rope. This was very strong and was used to catch all types of animals: deer, moose, bear, beaver, rats, ducks, geese, fox, lynx, mink and weasel. Never used guns at that time. He sold fur and bought cattle, pigs and chickens.

One time Old Man Bristow and his son Fred came and stayed with us while they looked for homesteads. He would carry me around all the time. When Old Man Bristow came back to live in the district my father bought a sow, a few chickens and some geese from him. He bought a cow at Cold Lake.

Many people died on the reserve from the flu in 1918. They couldn't keep up with the graves. Eleven in our family died at that time.

My father was chief at Frog Lake for thirty years. I was chief for six years and councillor for two.

There were fifteen children in our family but only six grew up. They were Fred, Eliza (married Bill Daniels), Edward, Pierre, Mary Louise (married Marcel Cross), and Peter. 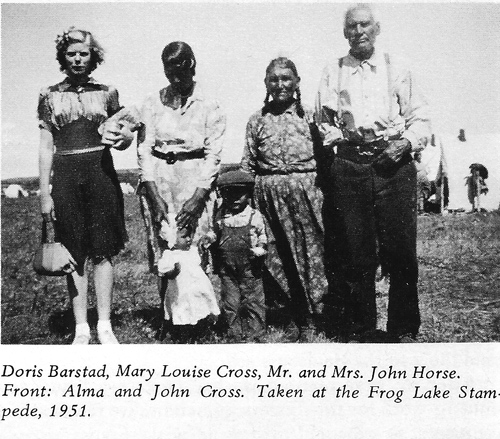