as told by Sam Krider

My parents, Solomon Martin and Emma Krider, my sister and I were living six miles east of Sheyenne, North Dakota, U.S.A. in 1907. That year was to stand out in our memories as one of near tragedy. Our area was prone to severe electrical storms, and that day was the climax for us. I was standing in the doorway of our barn about 4:00 p.m. when lightning struck a corner eight feet from me. My father, coming around the corner, saw me fall. I was to be out cold for some twelve hours! My sister Mabel fell inside the barn; my mother, with sisters Myrtle and Avis, halfway between the barn and house. They were about fifty feet away at the time. My father found the three lying together in the yard. He had got Mabel and me away from the barn, and all of them thought I was dead. The stovepipe on the house had been struck too, but my father had attached a rod to it which led down into the ground. Later regular lightning rods were put on the house.

Two four-year-old horses in the corner of the barn died on the spot. My father went in and cut three others loose so they could escape the fire. Two ran out, but the third had lain down, blocking the doorway. Papa jumped over it; then the horse got up and followed him. That horse ran for three miles! Because of the delay in getting out, my father's hands were badly burned. The chickens were in a coop adjoining the barn, so they perished, too. When I came to in the early hours of the next day, I saw the smoke and discovered the barn was gone. 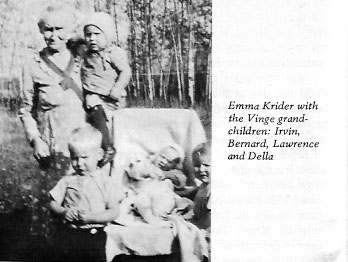 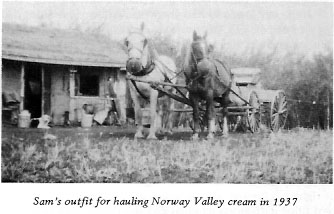 In 1929 we sold out in North Dakota, but I kept the animals. Myrtle was married and living in Saskatchewan; Mabel was married to Vic Anderson, living in the Norway Valley district. Accompanied by a friend, Lester Fread, I rode in a boxcar with the animals, five cows and five horses, and our "settler's effects." We slept on a bedspring suspended from the roof. On October 8 we arrived in Kitscoty. The next day my parents and Avis arrived on a passenger train. We had been milking the cows twice a day and shared the milk with the train crews or any others who wanted some. At Kitscoty we asked the cafe owner if he wanted any. He said, "Sure, I'll give you two chicken dinners for it." When we delivered two big pails to him he handed over two chocolate bars bearing the name Chicken Dinner!

With the cows tied behind two wagons we headed north of the river, staying for a while with Vic and Mabel. When I moved onto the Millerkee place (north of where Leif Pynten now lives) my parents came with me. When my father died in 1932 we were living with Avis and her husband, Clarence Vinge on the old Snaunes place, north of Andrew Nelson's. I rented the Jens Grenrud land, west of Gunder Enger's, in 1934. After I married Amy Dewey the next year, we continued to live there. Next we moved to the Carlson place by Alma Lake. Our first two children, Dorothy and Betty, were born while we were there. My mother took turns staying with us and my sisters. She died in 1939 while with us at Alma Lake. Later we moved back to the Millerkee place, where our first son, Doug, was born in 1943.

A few years later I bought a quarter of raw land from the C.P.R. (S.W. 5-56-3-4). Sammy was born in 1947 and Terry in 1956. I farmed the land, for seven years working jointly with Bob Smith, who now rents it. I have worked for local farmers, and from 1962 to 1967 hauled the mail from Frog Lake to Sputinow (Fishing Lake). Amy ran the Frog Lake post office from January 1962 until October 1969. She again took over the post office in May 1971 and is still there three days a week. Virginia (Jenny) Kinch replaces her when needed.

Dorothy married a neighbor, Albin Nelson, in 1955. Their story can be seen later in this chapter. Betty married Donald Horness, son of a former Lea Park ferry operator. 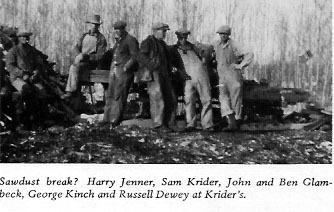 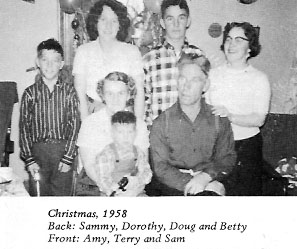 They live in Lloydminster with three daughters and a son, including a set of twins. Doug's wife is Dorothy Kenyon of Lone Rock, Saskatchewan. They live with their three boys in the Rushfeldt house, which was moved to a location between our house and the main road. Sammy was killed instantly while working on the oil rigs in February 1970. Terry took Grades I to XI at Heinsburg, then graduated from Elk Point High School in 1974. He now operates a Department of Highways grader on the Reserve and Fishing Lake Colony roads, as well as the highway north of Frog Lake store as far as Beaverdam.

Amy has been a member of the Martin Goodwill Club since its beginning. She does a great deal of Artex work, has started a spoon collection, and each year enjoys her garden, shrubs and flowers. I am still working three days a week for Mo Hamdon at the Frog Lake store. In my entire life I have spent only twenty-nine days in the hospital, nineteen of them for an eye operation in 1940. Some have thought my eye was affected by the lightning, but the specialist said that I had a congenital cataract condition. One of my hobbies is collecting ballpoint pens which carry names and/or advertising. I have more than two hundred of them displayed in a three-tiered rack I made. Some are from as far away as South Dakota, Ontario, and the Northwest Territories (given to me by Mike Nychyporuk when he worked on the barges). Many people remember my hobby and return from their travels with another addition for my collection. On November 1, 1975, we celebrated our fortieth anniversary. Our family surprised us with a supper at Frog Lake Hall, followed by a dance attended by many relatives, friends and neighbors.