Carl, born in Forbjerg, Denmark on July 5, 1886, was a blacksmith by trade. He thought that by getting out into the world he would make his fortune, so around the beginning of World War I he took a boat to South America. Because you didn't know who might be the enemy, ships gave each other a wide berth when passing. 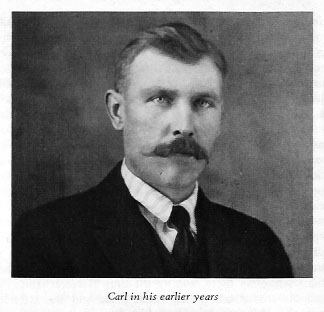 Carl landed at Buenos Aires, Argentina. From there he went to work on cattle and sheep ranches for a few years, doing some blacksmith work. Horses were ridden a great deal, but it was understood that when you were on another's land you did not dismount unless invited to do so. During his years there Carl learned Spanish. On March 30, 1917, he arrived at New York City on the ship "Oregon." His next move was to Reserve, Montana, where he remained for about ten years. He operated a blacksmith shop near the Montana - Saskatchewan border.

In the summer of 1929 Carl came to Canada and worked at Ponoka until harvest. He heard of a new settlement at Heinsburg and arrived here to find that the railroad went no further. He bought a quarter of CPR land from Rudolph Gregor and farmed it for one summer with only two horses, later with four. In the 1950's he rented a quarter from Benny Kates. One summer in those early years he kept Ole Johnson company at the ferry. The late 1930's found him blacksmithing for Vic Dennill at Dewberry. Many remember the episode of the foot-operated trip hammer that broke. "What happened?" asked Vic. Carl replied, "I don't know! It yumped, and it yiggled, and it yammed â an' then it broke!" 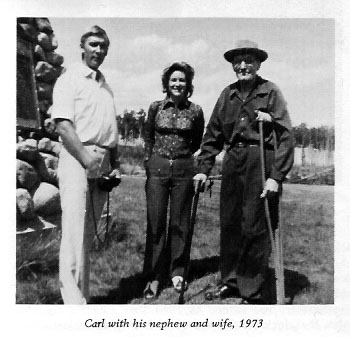 Carl once drove a 1927 car, which he sold to the Womacks family. He had also acquired a small Fordson tractor in later years. When Floyd Bendixen bought his place in 1960, Carl continued to live there until a slip on ice resulted in a fall which broke his hip. He spent six months in Elk Point Hospital and a year and a half in Blunt's Nursing Home in St. Paul. Then in the fall of 1972 he was sent to Edmonton for a series of cancer operations, and alternately spent time at the University and Glenrose Hospitals. In the spring of 1974 he returned to St. Paul and still resides there, in what has since been named Parkland Nursing Home.

Carl received his Canadian citizenship on April 25, 1962. When asked why he came to our province he said he'd heard a lot about farming in Alberta. But, in spite of his hopes for getting rich, he wasn't here long before he decided, "It would take me a thousand years to earn a thousand dollars!" He has been described by one who knows him well as "the kindest person to people and animals," and one who likes children. As far as relatives of his own, we know only of a nephew, Hans Stokkebroe in Denmark, who visited him a few years ago and a few people in the U.S.A. Carl will reach his "four score years and ten" this July (1976).