Dad, who was always called Gib by his friends, was about twenty years old when he came from Somerset, England, to Canada. He came directly to Frog Lake in the spring of 1911 and in the fall he filed a homestead on S.W. 26-55-4-W4th, the place where Floyd Bendixen lives. He married Elise Nolin in November 1913. Mother passed away in June of 1933, aged thirty-nine. I was married with a child of my own when she passed away and the oldest of the family, Eli, was working away from home. Dad was left with seven children ranging in age from two years to fifteen, the four girls were the youngest; between Dad and the boys they kept the family together. They all grew up, left home and got married. Between the nine of us we gave Dad thirty-five grandchildren, they in turn gave him thirty-three great grandchildren.

Back to the early days: just a few things I can remember and things I have been told. Dates are unknown. In the early years Dad worked on the telegraph lines. One summer he repaired the line from Frog Lake to Onion Lake. He also repaired the tower that carried the telegraph line over the Saskatchewan River at Fort Pitt. He worked other places on the line and I remember I heard him tell about working on the line now known as St. Albert. When I was a very young child he was running the ferry at Heinsburg.

On thinking back into the past I seem to recall that it was 1916 or 1917 when Dad took the ferry job, after the ferry had broke away with Mrs. Winkler on it, the Government floated another down the river from Edmonton, and during that time there was no ferry crossing for a season or two. I don't know what the wages were, as weeks would go by between passengers. He told too, about gophers swimming across the river and sometimes riding the ferry from the south side. They had a hide-hole on the shore and Dad used to snare them there with a string. It seems there were no gophers, or very few, north of this part of the river until then. In the winter months when the ferry wasn't running he trapped for furs. I remember he came home one evening with seven coyotes draped over the pack horse. He kept the ferry job until about 1922 when he got tired of it and quit. Gus Clack took over, then Gus Maas until his eyes failed, then John Nichols and later Ole Johnson.

The first school my brother Eli and I went to was Frog Lake School. Mother used to drive us there with a single horse and buggy, picking up Harold Franks on the corner where the Martin Club House now stands. It was about eight miles to the Frog Lake School but there was no school at Heins's and Martin School was closed. I can't remember going to school during the winter months. 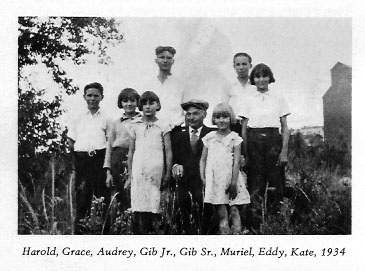 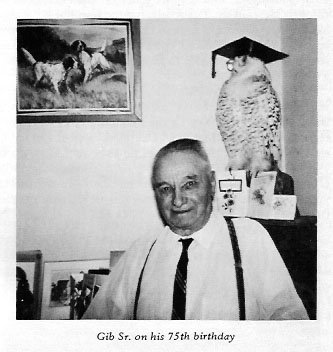 It was around 1919 that Dad built a better house on the homestead. He still had the doors and windows to put in when a fire came through and burned the house down. The next few years are vague. We moved to a farmhouse about five miles from the present site of Heinsburg which was then known as Heins's. It was on the S.W. 10-55-4-W4th and Dad bought it from Gus Maas, who later became ferryman. It was on the quarter south of Hans Keck. Here, about the year 1925, Mother ran the Heins Post Office; it was just a space partitioned off in the farmhouse.

I think it was 1927 when Dad took the ferry job again. The wages were 860 per month, later he got $100 a month. Usually the ferry operated about seven months of the year. Dad was the only ferryman and was on call twenty-four hours a day. He could charge a toll from 6 p.m. to 8 a.m. and crossing was free the rest of the time. Later he was given an assistant and toll was charged only after midnight until day light. He held the position of ferryman until 1943 or 44; all told he ran the ferry for twenty-five years. When the railroad came to Heinsburg the post office was moved there and Mother remained post-mistress. She was also operator for the only telephone in the town.

In 1929 Dad was appointed Justice of Peace for this district. I wish I could tell some about his work as J.P. but it was confidential and Dad was pretty close-mouthed about it; never talked about it to his family. He remained J.P. until 1948. His office was a room in our house that we had moved into Heinsburg and I remember policemen coming in, bringing people for trials. We did learn to respect the authority of the police and my brother Gilbert (Young Gib) became Heinsburg's town cop for a short time.

I don't remember when Dad sold out in Heinsburg to the Jenner family. He moved to Edmonton and worked for Edmonton Motors until his retirement five years ago. He was married for the second time but wife Mary passed away after only seventeen months of marriage. To date he lives alone in Edmonton and was eighty-six on February third, 1975. His nine children are all still living. Eli lives in Edson, was a carpenter, now retired. Gilbert is lather for a building company in Edmonton. Edward works for Crosstown Motors, Edmonton. Harold is employed by the Edmonton School Department. Katherine (Penner) and family live on a farm at Lumby, B.C. Grace (Nixon's) husband was managing strip mining operations at Brooks, Alberta. This operation closed down and he is now manager for a gravel crushing firm. Audrey's (Wourms) husband is a welder for B.S. and B Pipelines and lives in the Looma district just outside Edmonton. Muriel (Funk) is in Camrose and her husband is engineer for a pipeline company. I, Gladys (Bosvik), have retired from the farm to Elk Point since my husband Pete passed away in 1973.