(as told to Marilyn Bosvik)

Peter Bosvik and his brother Jorgen (George) came over from Norway to Canada in 1920. Pete worked for Knut Rinde for two summers. Gradually he learned to speak English, and later worked for other farmers in Saskatchewan and Alberta. One fall, after a whole summer's work and wages, Pete was on his way back home to Heinsburg. He was befriended by some man who suggested that they share a hotel room to save themselves some money. As times were hard, Pete agree. When he woke up the next morning his money was all gone. The year had certainly ended on a discouraging note. 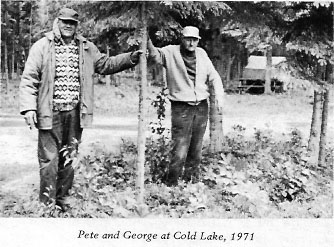 For fifteen years, during the winters, Pete and Jorgen fished on the north side of Cold Lake. One winter after fishing they planned to go even further north and trap rats around Primrose Lake. They left with two horses, a sleigh and a cook stove. After two months of travelling through flooded swamps, they found themselves without flour and sugar, and with only one horse. They tied the sleigh box onto the sleigh, and because it was the only dry place, this was where they slept. For food they shot partridges. They decided that they could go no further, so they walked back out, empty-handed. Somewhere north of Cold Lake, in the muskeg, on a little knoll, sits a sleigh with a stove on it. When they got back to Cold Lake their friends were very surprised to see them. Pete and Jibrgen went from one restaurant to another until they couldn't eat one more bite. 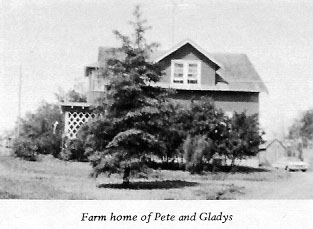 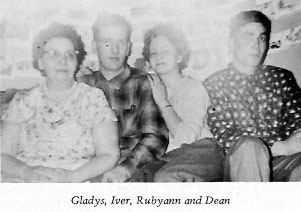 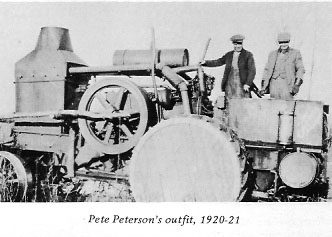 In 1932 Pete married Gladys Evans from Heinsburg. They rented and lived on the N.W. 34-55-4-W4. The first winter they were married, Gladys accompanied Pete and Jorgen up to Cold Lake to fish. The following winter they went to Cold Lake again, only this time with a threemonth-old baby. Each time they returned a new sod roof would have to be put on the log cabin and the remains of the old one cleaned out of it. For supplies throughout the winter Jogen would walk across the lake to the town of Cold Lake. The third winter Pete went back to Cold Lake, Gladys stayed behind with the baby. She heated snow for washing and watering a few head of cattle. She had enough supplies to last the winter; therefore months would go by and she wouldn't see a soul.

In 1939 Pete and Gladys bought their first quarter of land with a down payment of one dollar. That fall they moved onto the N.E. 3-56-4-W4 and started to build a house. Pete brushed the land with an axe and broke it with a walking plough and three horses. He built a road north of his place by using a 15-30 tractor and fresno. He used the sleeves out of an old 15-30 for a culvert. Pete, Hans Keck and Ed Rushfeldt had a threshing machine, and together they would help each other thresh their crops.

When Jorgen moved away from Heinsburg to Quesnel, B.C. to work in a sawmill, Pete rented his land and later bought it. In 1947 he built onto his house, which was much needed, as there were now five children: Rubyann, Iver, Dean, Verna and Bruce. 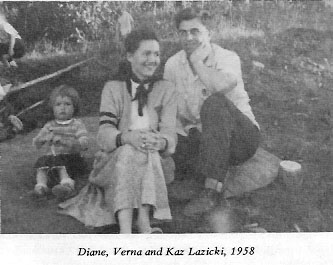 In 1948 Pete put in a 32-volt light plant system. They then had electric lights, a washing machine and a vacuum cleaner. They raised sheep, sheared them, and hauled the wool in sacks to Vermilion. The wool was also used for their own stockings and mitts, which Gladys made as well as for blankets. They grew their own wheat, which they had ground into flour.

A happy memory of the children is that of being taken to Onion Lake to picnics and to the Vermilion fair every year. Riding in the back of a half-ton to Elk Point to see a show every Saturday night was really fun. They went to whist drives in Norway Valley, and Pete would play trump whist at the Martin Clubhouse.

In 1968 Pete and Gladys, Jorgen and his wife, Rose, and Jorgen Jr. made a trip back to Bosvik's Point. They picked up parts of the old cook stove as souvenirs of their great fishing days.

Over the years Pete acquired six quarters of land and built up his herd of cattle to 450 head. He continued to farm with his sons until he died in 1972. Gladys now makes her home in Elk Point. Dean and I, with our family, are living on the home place.

Rubyann, the youngest, became a teacher. She married my cousin, Laverne Kittlitz, and resides in Edmonton. Iver is married to my sister, Marguerite (Kittlitz). He and his family farm at Willingdon, having lived on the Scheidel place at one time. Verna, husband Kazmir Lazicki, and family live in Elk Point. He is a teacher and she works in the office of the hospital. Bruce and Vivian (Trost) and their family reside in Ardrossan. He works as a mechanic in Edmonton. Vivian taught in Heinsburg for a short time.