We came from Numedal in Norway to Alberta in 1927, my father and mother, Anders and Anne Ãdegaarden; my nephew Trygve, thirteen years old; my wife, Befit and I with our two boys Kaare, four and a half years, and Harald, two and a half years old. My brother, Einar, and I came to Edmonton in April and were sent out from the old immigration hall to cut brush for a farmer between Tofield and Kingman. We had to have twenty-five dollars for that month, after that we could do as we pleased. We worked for $1.50 a day. We received $2.00 per day in the haying season and $3.00 for harvest.

In September, father, mother and Trygve came on the train from Halifax to Kitsctoy and went from there to Norway Valley. My wife and two boys went on to Edmonton. I met them at the railway station and we went down to where I was working. Late in the fall we went to Norway Valley. The ferry at Lea Park did not operate, too much ice in the river, but we got across in a row boat. It was eight or nine miles to Norway Valley so I left Befit and the boys at the ferry shack with Mrs. Maas, and went up the hill to find someone that could take us there. I was lucky enough to meet Mr. Horness and his brother-in-law, Oscar Oie, in an old Model T Ford car. Oscar knew where the place was, so they took us up there. 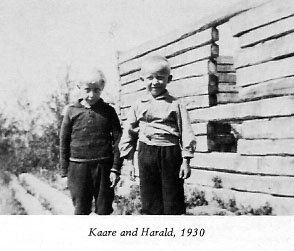 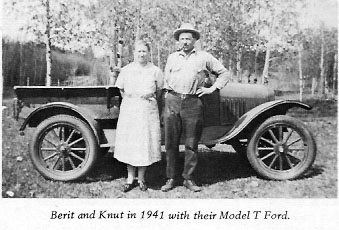 That winter all the Odegaardens stayed at the old homestead of A. Lunden. Later on Dad bought the place. It was S.W. 22-55-3-W4th. We bought a team of horses and a new sleigh and took our poplar logs for a house and barn. Einar and I bought a C.P.R. quarter, the N.E. 21-55-3-W4th. The price was $12.00 an acre. If there had been a market for stones, we would have paid for the land in just a few years.

There were many Norwegians in Norway Valley in those early years, but it gradually thinned out. It was a very fine neighborhood there in Norway Valley. Dad and mother went back to Norway in June 1936, Einar and Trygve went to Vancouver the same summer. They worked around there for about a year and then went back to Norway for good. In the summer of 1946 we gave the land back to the C.P.R. and moved back to Dad's old place. Then Befit and I took a trip back to Norway. It had been a hard time there during the German occupation. Einar had been active in the underground work. He said the Germans had confiscated all the guns so they had to use traps and snares to catch crows; the young ones were good eating, but the old ones were very tough. We waited and waited for a chance to get back to Canada. Finally we got a place on the Swedish boat, Drothningholm. We arrived back in Norway Valley only two days short of one year. Kaare, the oldest boy, had taken care of the farm while we were away, so everything was in fine shape. 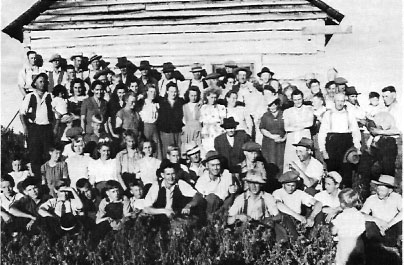 In 1952, we bought the N.W. 22-55-3-W4th from Iver Gunderson, and moved up there in the fall of '55, where we stayed until we sold the farm in '72 to George Sanders. We then moved to Elk Point in the fall of '73. Our son, Kaare, who lives in St. Paul, Alberta, is married to Irene Wilson; they have one daughter, Karen Anne. Harald lives in Vancouver, is married to Mary Albers, but has no children.