I was manager of the Heinsburg Branch of the Imperial Lumber Co. Ltd. during the period 1935 - 1941. I had the privilege of opening that store in the fall of 1935. The wife and I enjoyed the years we spent there and the many friends we made among a very cosmopolitan district. In my store you would at times hear English, French, Ukrainian, Rumanian, Cree and Norwegian, but not Danish which was my language. It became my duty to close that store some twenty-five years later; felt kind of bad about it. At present our home is in Edmonton. 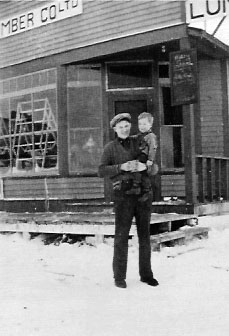