A VISIT WITH ARCHIE MILLER

April 2, 1975 was the ninetieth anniversary of the Frog Lake Massacre. That afternoon I went to the office of Archie Miller, a long-time resident of Lloydminster. I knew he had a storehouse of knowledge of what had happened in the early 1900's. To my delight he not only could tell about events but his collection of pictures, clippings, etc. is priceless. Since the "research fever" had really caught up with me it was a most interesting and informative time. The following are random subjects which I hope, in sharing, will bring to you as much enjoyment as they did to me.

Archie and his father had been friends of Harry Bowtell, so I surprised him with the announcement that I was a granddaughter. At first he thought perhaps I was Alma's daughter. My turn to be surprised had come first as I was studying a picture of the 1904 telegraph office in Lloydminster. Archie said I should contact a lady whom, he believed, was living in Saskatoon. After another bit of information was exchanged I realized he meant the former Alma Bowtell and I exclaimed, "That's my aunt!"

One thing I learned was that Emma McClenaghan, later Bowtell, had her telegraph office located by the Britannia Hotel where the Co-op Store now stands. Across the street from her office, and a short distance from where Archie's office is now located, was a skating rink where Archie once played hockey. Skinner Motors occupies the spot at the present time.

Among Archie's picture collection were two photos I found particularly. interesting. The first was that of a group of Indians from Onion Lake who went to Lloydminster in 1910 to meet the Prime Minister. Before going to Archie's office I had been interviewing Joe Whitford, a great grandson of John Pritchard who was present at the Frog Lake Massacre. That 1910 photo did not include John's son, Solomon (Sam) Pritchard but I saw a number of very familiar names like Horse, Waskahat, Moocheweines and Quinney. Those Quinneys I recognized before reading the captions, because they so resembled the Quinneys living not far from me here at Frog Lake.

After you really get into research you find that events tie in together more and more, and questions that have formed in your mind are being answered every day. The mention of Laurier caused me to recall being told that when he visited Vermilion, Harry Bowtell was given the stool that was used by him to step down from the train. It was the type of stool that when placed upside down could be used to support a very young child who could not yet sit alone. It was often, used in this way in the Bowtell household.

The second picture was of a piece of land strewn with buffalo bones. This was the sight beheld by the man who homesteaded it. My first thought was - another case of the whiteman's indiscriminate killing of the buffalo for hides. But, as Archie told me, among the bones were numerous arrow heads. The buffalo obviously were killed by Indians. Why so many at one spot? Had the buffalo come there on their own because of salt licks or excellent grazing? Or had they been driven there, perhaps into a pound, year after year? Many readers may have a better explanation.

Archie also related that in the early years fires were a great problem. Time and again school children were dismissed to help fight the approaching flames. Because of those fires there were no trees in Lloydminster. Back of Archie's present home, behind Dr. Berg's clinic, there was a plowed strip of about twenty furrows as a fireguard. This brought to mind Ben French's opening article in the Ferguson Flats book "Reminiscing." He mentions the size of timber that once stood in his area. I assume Lloydminster did not lose such large trees as Ben describes. 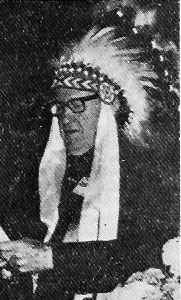 Reluctantly I left Archie's office. I had to be getting home and so did Archie â for the second time. At seventy-nine he walks to the office each day besides caring for his wife and doing the work about the house. He had gone home a little early but when the men in the office next door to his phoned him he said he'd come down, and did so in very short order.

As I prepared to write this account a thought came to me. For every memento this man had there was also a tribute. Among them were lifetime memberships, letters of appreciation and the honor of being named "Chief Big Bear" by the Indians of Onion Lake. Big Bear had spoken and I had enjoyed every minute!

Archie is well-known for the helping hand he has extended to so many. Certain residents of the area covered in this book can attest to his kindness.