Lois Kjenner and I were married on July 20, 1951. We lived on the farm until 1963 when we moved to Heinsburg. I was employed as grain buyer for Alberta Pacific Grain Ltd. Later Federal Grain Ltd. took over and then, in 1971, I continued to buy for the Alberta Wheat Pool, which bought out Federal.

We have two children, David and Donna. Both attended Heinsburg School from Grades I to XI, inclusive and took their Grade XII at Elk Point. After graduation in 1970 David was employed by Windsor Salt at Lindbergh. In February, 1974 he began a six-month training course for the R.C.M.P. at Regina. After graduating there on August 9 he was posted to the detachment at High River, Alberta. As of the end of 1975 he is still at High River. After graduating from Elk Point in 1973 Donna took a position with the Department of Health and Social Development in Edmonton. She is still employed there. Both Donna and David liked sports and played with local teams. They still participate in active sports away from home. 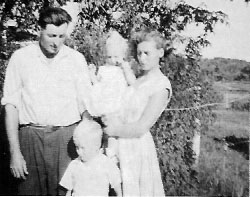