Alexander Blacklock was born in Durham, England on April 10, 1888. He was the son of Alexander Blacklock and Margaret Lewis. In 1905 he arrived in Quebec, Canada. From there he journeyed down through the States and back up to Carbon, Alberta where he worked in the coal mines. In 1916 he joined in the First World War with the Engineers. He was taken prisoner but somehow managed to escape. After the war he received a letter in King George V's own handwriting, thanking him for the trials and tribulations he had endured.

After the war he returned to Carbon and on April 24, 1919 he married Armina Prowse (of Carbon) in Calgary. She was born on October 23, 1897 in Charlottetown, P.E.I. She resided with her parents, Henry and Mary Prowse, in York, P.E.I. until June 1905 when they journeyed to Carbon to make their home. They took up farming and her father was also the local blacksmith in the town. Alex was interested in raising cattle, but in southern Alberta water was hard to find, and many times he endured severe cold watching a small trickle of water coming from a well while he was waiting for the stock to drink. So, with this in mind, he set out looking for land with plenty of water, and in May of 1919 he and his bride arrived at Mooswa, Alberta (now known as Lindbergh). He found just what he was looking for on the N.E. 32-56-4-4, a quarter section of land with a creek running through it, plenty of water and open range for pasture.

Here, then, they settled down to try their hand at farming, raising cattle and horses and also a family. On December 23, 1919 they were blessed with twin boys, Alex and Harry. At that time there was no hospital, but with the kind help of a neighbor, Mrs. Henry Anderson, Grandma Prowse, and the late Dr. F.G. Miller, they were brought safely into the world. Then on May 11, 1921 another son Gordon was born. By this time the late Dr. A.G. Ross had arrived in the area, and he assisted at this birth. On October 16, 1925 a fourth son, Roger was born, and finally a longed-for daughter, Joyce arrived February 1, 1931. She was followed by two more sons: Jerrold, born October 31, 1936 and Edwin, born October 31, 1938. 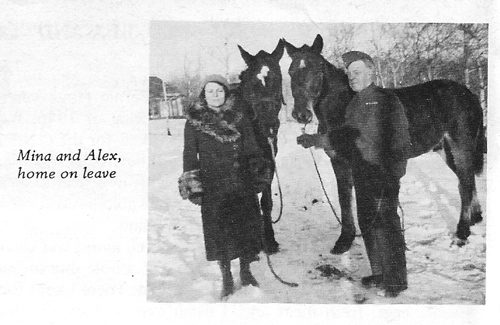 Both Alex and Mina were fond of horses and they raised many good saddle horses. They both did a lot of riding in the earlier years and this followed on down to the children, who grew up to be very fond of horses and enjoyed riding, too. One of my earliest recollections of my father-in-law was when I was about ten years old and on my way to school. We met him on the road on a nice bay horse. He was wearing his cowboy hat which he always wore, even after he retired.

Things were not easy during those first years: frost, low prices, cattle dying from unknown causes, etc. Somehow, like everyone else, they managed to hang on, and gradually things improved. School was another problem as they lived six miles from the nearest one. So this pioneer mother, along with everything else to do, set out to educate her children by correspondence. The four oldest took all their schooling this way, with the exception of Harry who stayed with the Carlson family at Lindbergh and attended school there for a time. Of the three younger ones, Joyce and Jerry started out by correspondence, but by the time Edwin was ready to start school they were able to attend at Lake Whitney School and later V-Day School.

Then in 1939, when the Second World War broke out, Alex again volunteered and served as a cook with the First Canadian Armored Tank Brigade. Three sons also volunteered their services. Harry served with the Service Corps, Gordon with the 17th Canadian Field Ambulance, and Roger in Canada with the reinforcement troops. All were very fortunate and returned home safely. Alex Jr. remained at home to carry on the farming, and the younger ones were still in school. After the war Alex cooked for a number of years on barges up north on the Mackenzie and Athabasca Rivers.

In May of 1963 they sold the farm to their son Jerry and they retired to Carbon. The two older boys, Alex and Harry, farm at Lindbergh. Gordon farms at Dewberry. Roger is an electrical engineer for Great Canadian Oil Sands at Ft. McMurray. Joyce married Charlie Swan of Islay and now they reside in Lloydminster. Edwin is in Edmonton and works with a landscaping company. 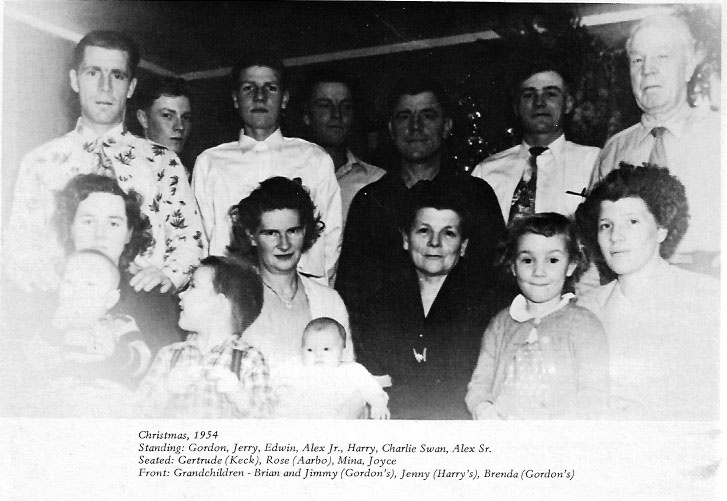 On October 1, 1967 Alex and Mina returned to live in Elk Point, to be nearer their family. On April 24, 1969 they quietly celebrated their 50th anniversary along with their family and friends. Then, on February 1, 1970 they moved to Blunt's Nursing Home in St. Paul. Alex Blacklock was a quiet, kindly man with a sense of humor, who derived much pleasure from his family - especially the grandchildren, of whom there are seventeen. His greatest desire was to become a great-grandfather. This wish was not to be fulfilled while he lived. Now there are two. He passed away on April 13, 1970 at the age of 82 years in St. Therese Hospital at St. Paul, and was laid to rest in the Mooswa Cemetery. Mina Blacklock is a quiet, reserved person. She is still residing in the nursing home and spends her time reading, crocheting, and embroidering, and enjoys fairly good health. 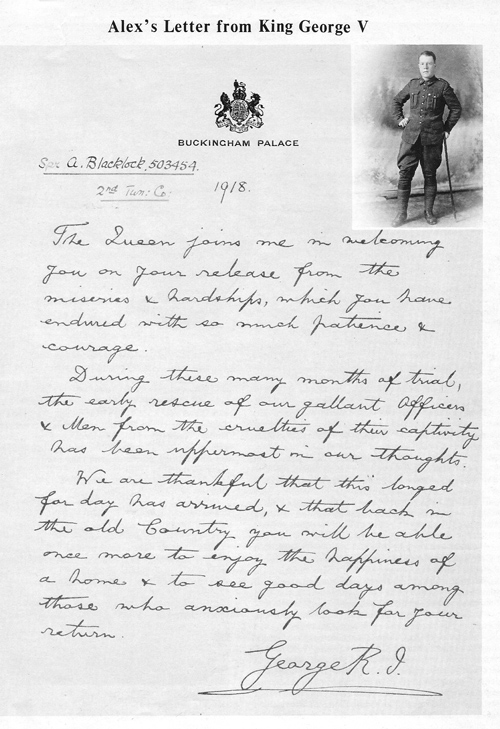