In 1910 I came to Frog Lake with my folks Mr. and Mrs. Dave Bristow, the first homesteaders in the district. We left a farm near the town of Okotoks to come north. Dad and three of my brothers, Dave, Fred and Dalton all filed on homesteads. This was a very new part of the world; not a road any place and bush every place you looked.

In 1912 I married Fred Bowtell. He and his brother Harry had a store near Clearwater Lake. Ours was the first white wedding in Frog Lake since the North-West Rebellion in 1885. We were married at home and the minister that married us came out from Vermilion, a Mr. Simons whom we had known in Calgary. All the guests came to our wedding by horse and buggy, team and wagon and even by ox team. There were three ox teams at our wedding.

We made our home on the east half of 36-56-4-W4th. There weren't too many road signs in those days but there was a lone pine tree on a hill north-east of where Roy Bristow lived. It was used as a landmark and everybody wanted to know where you lived from that Lone Pine Tree. Our nearest town was Kitscoty where we had to haul our grain and pigs. We lived on the farm till 1945 when we sold out and moved to Edmonton. Fred's health was failing and he wasn't able to carry on with the work. 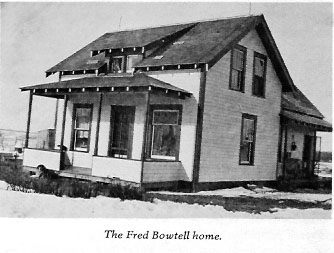 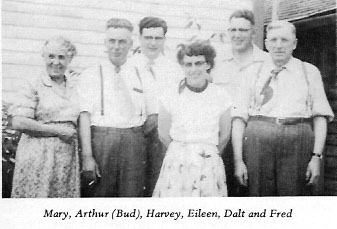 We had four children. Eileen, Mrs. Louis Gamier, lives in Clandonald, Alberta; Arthur (Bud) lives in Wainwright; Dalton lives in Surrey, B.C.; and Harvey in Lloydminster. We celebrated our 50th anniversary in 1962 in Edmonton with our family and a wide circle of friends present.

After a lengthy illness Fred passed away on April 16th, 1970. I still live in my own home enjoying my different hobbies. I have thirteen grandchildren and fifteen great grandchildren and look forward to visits with all members of my family.

I think the stories Fred used to tell us were very interesting so I will try to put a few of his adventures together. My husband of fifty-eight years was born in 1885. In 1892 his parents came west to Alberta from Collingwood, Ontario, bringing with them their four sons and two daughters. They settled on a homestead east of Lacombe. Farming in Alberta was difficult in those early years but they managed to eke out a fair living and wanted to give their children a good education. However schools were only open during the summer months and Fred's education was only grade five; by then he was old enough to begin making a living for himself.

In the spring of 1903 he and his older brother, Harry, left the homestead with the intention of making a living in what is now known as the Vermilion district. Accompanied by Harvey McGowan and Jack Bristow they set out for North-Eastern Alberta. Their mode of travel was team and wagon, leading another team. Upon reaching Edmonton they spent some time there before heading east.

They came through Vegreville and followed the C.N.R. survey line. I remember Fred telling that it took three days hard and rough travelling from Vegreville to Vermilion. Here they heard that the railroad was coming through in the near future so they made camp and began looking for homesteads.

The district where Harry decided to file his homestead was later given the name of Borradaile. Land nearer Vermilion was a bit too rocky for their liking. Fred chose land a mile west of where the Robertson farm is situated, near the old highway 16. While there Fred made two trips on horseback to bring mail from Edmonton; he also hauled freight with team and sleigh. There was no stopping place east of Vegreville except Mr. Lavoy's, after whom the town of Lavoy was named.

Fred made several trips to Lloydminster and became friendly with Mr. Barr who had established the Barr Colony in 1903. Fred told of the time that someone had taken a shot at Mr. Barr and he (Fred) was asked to take a witness from Lloydminster to Battleford where the hearing was to be held. It was a trip for which he had been given very short notice and they made the hundred miles in fourteen hours with team and buggy.

I believe it was in 1904 that brothers Frank and Art followed Fred and Harry into north-eastern Alberta.

One winter, before coming to Frog Lake Fred and a neighbor left on a trip from Vermilion to Lloydminster. The night turned bitterly cold and a blizzard came up. They became lost and were forced to camp in the open. Being fearful of leaving camp they used part of the sleigh-box for campfire wood. This kept them from freezing. However, Fred's feet were frozen before they came to a house where they could warm up, have something to eat and feed their team. Fred said he suffered considerable pain for a few days.

Sometime in 1904 Fred and his brothers left the homestead. Fred built and operated a livery stable in the town of Vermilion, as by that time the town had begun to thrive. This proved to be quite a profitable business venture. He also freighted from Fort Pitt to Lloydminster and in that year before the railroad came in brought four families to settle in Vermilion.

One very mild winter he hauled the mail in a buggy as there was very little snow. The weather-man made up for it the next winter when they had snow comparable to the winter of 1956, when the snow was still on the ground in mid-May. He made two trips down the Saskatchewan River by rafts, hauling telephone poles for the C.N.R. These poles were criss-crossed into booms and tied together with strong heavy ropes. They ate and slept on the rafts and enjoyed the beautiful, wild scenery and glimpses of moose and deer.

In 1910 Fred came to Frog Lake and worked with Harry in his store that he had previously built and run near the shore of Clearwater Lake. While there he helped move the remains of the victims of the Frog Lake Massacre to the present historic site. This was about twenty-five years after the incident and identification of the bodies was most difficult. That year, too, in the fall, he and some Indian friends had the honor of being members of a welcoming committee to greet Sir Wilfred Laurier when he paid a visit to Lloydminster. His Indian friends felt it a great honor indeed to shake hands with the Prime Minister of Canada.

We had hardships but I have many happy memories of the years we spent together and of the friends and relations we left behind when we left Frog Lake. I am always pleased to have them visit me in my home here in Edmonton.