by Russell and Bertha (Holowaychuk) Bazian

Russell's parents, Fred and Mary (Kuziw) Bazian came from the Ukraine, Europe, to Canada and settled in the Primula district in the fall of 1910. They stayed over winter with his grandparents, John and Anna Kuziw, who had come here one year earlier. That is where Russell was born in March, 1911. Dad Bazian got his homestead that spring and built a two-room log house covered with sod and they moved in.

He used oxen at first, but not for very long, as he soon got horses. He had served three years with the cavalry in the army in Europe before coming to Canada, so he loved to work with horses and loved horseback riding. He broke some land with horses, and after working it out, he sowed some wheat in the spring by broadcasting the seed by hand and then harrowing. He threshed it out with a flail.

After there was more land broke and more grain to thresh they used a horse-driven threshing machine. It would take ten or twelve horses going around in a circle to make the machine thresh . The grain was cut into bundles by hand or with a binder. Then the bundles were stacked. Two men would cut the strings and feed the bundles into the machine by hand. The straw was also pushed away by hand. The grain was caught into sacks and hauled away to a granary with a wagon and horses. Later they had a threshing machine run with a tractor or a steam engine.

They used to take wheat to Vermilion in sacks with a sleigh and horses. They would sell it to the flour mill and bring back flour, bran and wheatlets. The trip would take two or three days. Coming home when they got to Raft Lake, north of Clandonald, the horses would know their way home without guidance. The men would walk behind the sleigh most of the way to keep warm. 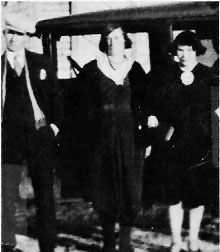 Russell has four brothers and four sisters: Dan, Walter, Jerry, Olga (Mrs. Al Miller), and Helen (Mrs. Victor Dragish), all of Edmonton; Jim of Saskatoon, Saskatchewan; Annie Skolarchuk of Lindbergh; and Zelma (Mrs. Wm. Fairley) of Vancouver. Their mother died in 1931 at the age of forty-one years. Jerry was four and Helen was only two years old at the time. Dan was good around the house so he used to help the girls with household chores and they managed. Then he got married and moved away. Dad married his second wife Ksenia, in 1937. He lived and farmed on the same place until he retired to Edmonton. He died in 1972 at the age of 93 years.

We were married on November 3, 1936 and went to live on Russell's homestead one mile north of our present home. Russell had built a two-room log house, plastered with brown clay inside and out. In the spring I whitewashed the inside walls and it looked much better. We had a table out of rough lumber and a bench to sit on. Apple boxes (wooden) were my kitchen cupboards. A cook stove (I'm still using it), an airtight heater, a bed, and a radio were about all the furniture we had to start with.

We farmed with horses at first until we got our first tractor â a used 15-30 on steel wheels. (We still have it). Later on we put on rubber tires and it sure made a difference in riding on it. Russell built his own sawmill, so we made our own lumber, also our own shingles. Now our son Richard has built a new all-steel sawmill with some of the parts from our old mill, so this should last much longer than ours did, as it had a wooden frame.

We lived on our homestead for about five years, then we rented land in the Primrose district for three years. When we were moving back to our present home in the first part of March, 1945 the snow was all gone. We used horses and wagons (high wheels) to bring our belongings back across the river. The ice on the river was getting full of holes but we still made it across. It was nice and warm and the dust was flying on the roads. We crossed at the Lindbergh crossing.

When we still lived on our homestead we used to drive an old Essex car, which had to be fixed every time we wanted to go any place. We would take butter to Hazeldine to Graham Gardiner's store and get 10 to 15 cents a pound. Then we would get groceries like 2 pounds of rice for a quarter, prunes at 2 pounds for 25 cents, too, and other groceries. We also used to buy a twenty-five pound wooden box of mixed, dried fruit for about two or three dollars. That was enough fruit for all winter. The mixture consisted of prunes, peaches, pears and apples.

We have a family of five children. Bill and Venetta and their two girls (Nicole and Chantelle) live in Edmonton, where he does auto body work. Ross, Heather, and two girls, Sandra and Tammy, live in Sherwood Park, Alberta. He is a pressure welder. Richard and Joyce, two girls and one boy (Leah, Michael, and Jennifer) live in Burstall, Saskatchewan, and he works at the gas plant in Empress. He does instrumentation. Larry is farming and lives home here. Sharon lives and works as a secretary in Edmonton.

When Bill first started school he went to Middle Creek school in Primrose for about two months. Then he went to Primula school. When he started school there he rode on a horse named Dolly. Then, when the other boys started to go, they had a two-wheel buggy for the summer and a closed-in cutter with a little heater that burned wood for winter. They used a horse named Lady. If they tried to hitch her up without watering her first she would not move or else just take off pulling the boy holding on to the rope with her to the water trough. She had to have her drink. 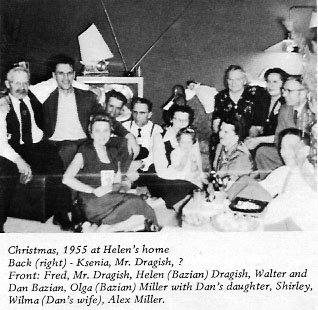 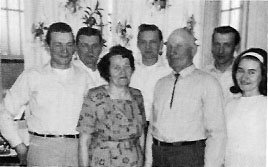 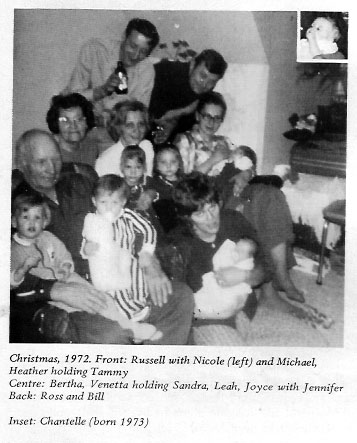 Sharon started school in Heinsburg after the buses came in. They had to cross the river on the ferry and the cage in spring and fall when the river was freezing over or breaking up. That was quite a problem. When they built the bridge it was a real blessing. The river was quite a problem especially when the water was low. We used to cross at Lindbergh a lot. When the water was low you had to drive into the water a ways as the ferry couldn't come over the rocks. It was free during the day till six o'clock and after that it was twenty-five cents for team or car and driver, plus ten cents for each passenger.

If you had to cross late at night and the ferry man was asleep it was hard to wake him up from the opposite side. You either hollered or whistled real loud and waited, hoping he heard you. Then they used to have a wire across the river that served as a phone. You could ring the bell on the opposite side and it would ring in the ferry shack and wake the operator up. It worked on a battery so if the battery was good everything was O.K.

I, Bertha, was born in Smoky Lake, Alberta in October, 1912. I came to Primrose district in the spring of 1929 with my parents, one brother, and one sister. We came by train from Smoky Lake to Elk Point, and then by wagon and team from there to Primrose, as the train only came to Elk Point at the time. 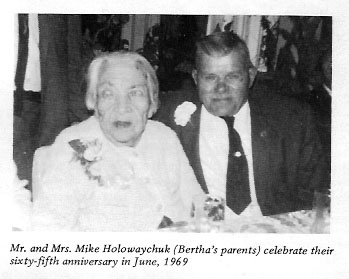 I have one brother and two sisters. Mary (Mrs. H. Shipka) and Mike live in Edmonton: Nancy (Mrs. Roy Vian) lives in California. My dad is in the Senior Citizen's Home in Smoky Lake. He is 96 years old. My mother passed away in July 1973 at the age of 97 years, 11 months. May 1976: At this time Bill and his family are on a farm in the Warspite area, with the children attending school at Smoky Lake. Ross has purchased the Jim Bazian farm. The Frank Sikora family held an auction sale on April 30.