as remembered by friends

Edward Albert Walberg, Ed to his neighbors, was born in Sweden December 29, 1895. He came to Canada in 1905 and lived in Winnipeg until he came to Wainwright, Alberta district in the 1920's and worked there for several years with the C.N.R. He and his two sons, Elfias and Francis, arrived in the Acomb district in the early 1930's. There he set up farming and his boys attended the Acomb School. They were all well liked in the district and Ed proved to be quite a handyman.

He converted a Model T Ford touring car to a farm truck, which served him well on the farm. He also rigged up what was probably the first computer in the district. Coyotes were quite bad in those days and Ed liked to keep track of the number of his chickens they got away with each day. In order to keep count he invented a contraption to do this without his having to go into the chicken house each evening to count them on the roost. The computer was made somewhat like a wheel set in a trap door in the wall. When a chicken walked into the building it stepped onto a trap that made the wheel turn just so far and stop. Each time it turned it tallied. When he closed the trap door for the night he read the tally and knew how many had made a meal for the coyotes, then he adjusted it ready for the next evening's action and closed the door. Next morning when the chickens were let out, it was through the same trap door, but under the "computer", without tripping the wheel. 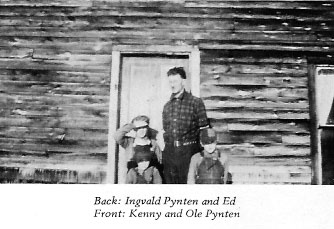 He worked for W.G. Giles in Marwayne during the spring and summer of 1944, returned to Acomb for the winter, then went back to work for the C.N.R. on the construction of new stations. When he let it be known that his effects were for sale, a neighbor lady asked him to price his buggy, it being in A-1 shape, as Ed kept his equipment in good repair. He set the price at $2.50, but she told him that in no way would she pay more than $2.00, which she got it for after a lengthy bargaining session. Bob Maxwell bought the converted Ford truck for $40.

In 1946 he married Esther, daughter of Peter and Clara Pynten of Norway Valley. They have now retired and own their home in Edmonton. They have three daughters: Diane and Mrs. Gordon Bedard of Edmonton; and Mrs. Colin Unterschute of Fort McMurray.