Gus and Ole were born in northern Sweden. Together with their parents and the rest of the family they went directly west to Trondhiem, Norway and sailed from there to Canada. Their folks homesteaded at Bruce, where their father is buried. With their mother they came and homesteaded on S.W. 1/4-30-55-3-W4 in 1909. She died and is buried in the cemetery on the old Hans Keck place.

Gus and Ole farmed this quarter, had milk cows, milked and shipped cream. They raised guinea hens and cats. They were very fond of animals and took good care of them. Each one had a name. They became so attached to their animals that it was difficult for them to sell any. They always had the coffee pot brewing on the stove, so you were always welcome to a cup. Children got a peppermint every time they visited. It was great to get a treat.

Ole was the ferryman in Heinsburg in the early 1920's. Also at that time they had a Model T Ford car, which only Ole drove. He passed away in the fall of 1944. Gus stayed alone until the following spring, when he sold out. Bernt Glambeck bought his land. Gus then went to stay with a niece in Wetaskiwin. He passed away in the 1950s. 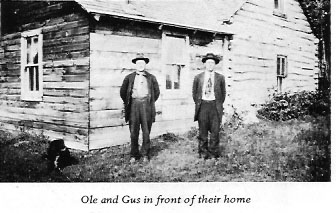 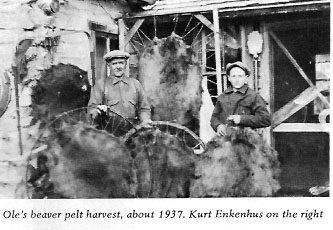