Everett and Gunhild Helgerson were married on July 16, 1913 in Benson, Minnesota, U.S.A. Mrs. Helgerson was a daughter of Olav Lunden, who also settled in the Lea Park area, and was well known as the local blacksmith there for many years. They moved from the U.S. and homesteaded in the Norway Valley district in 1914. Their old log farmhouse is still there, and was occupied by the Qdegaarden family until a few years ago. The Helgersons farmed at Norway Valley for twenty years, and many will remember when Everett was assistant to Oscar Fleming, operating the Lea Park ferry in 1930. Later in the season of the same year he, Everett, became head man with N.B. Horness as assistant. In 1931 he was assistant to Ole Tweed and they operated the ferry from then through 1936. Everett and Gunhild were active in the church and community affairs, and many of the Norway Valley school teachers enjoyed the home-cooking and homey atmosphere of the Helgerson home, where several of them boarded. 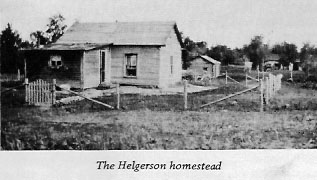 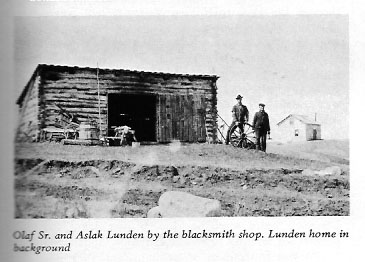 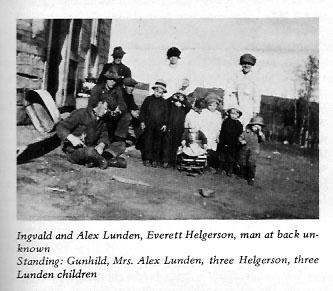 When they semi-retired they moved to Edmonton, Alberta where they remained for seven years. From there they moved to Prince Rupert, B.C. where Mr. Helgerson worked as a shipbuilder during the second war. They were very happy here amongst a lot of Scandinavian friends, and Gunhild felt that Prince Rupert was much like her homeland, Kvitseig, Norway, where she came from at the age of sixteen. Mrs. Helgerson passed away in 1946 at the age of fifty-five years, with a heart condition. Everett enjoyed good health and spent his time visiting amongst his children. He was living near his son in Pentiction, B.C. when he passed away at the age of eighty-one.

They had three children: Cora, the oldest, married a Saskatchewan boy, Cecil Reilly. They are now semi-retired, living on Vancouver Island, and have three children and four grandchildren. Harold, the second child, married an English girl while serving over in England with the R.C.A.F. during World War II. They also had three children and three grandchildren. Harold's wife, Joyce, passed away. He has remarried and now lives in Creston, B.C. The youngest son, Leslie (Bud), married Betty Thompson, a Prince Rupert girl. They, too, have three children, but none are married as yet. Bud and Betty live in Pentiction, B.C.